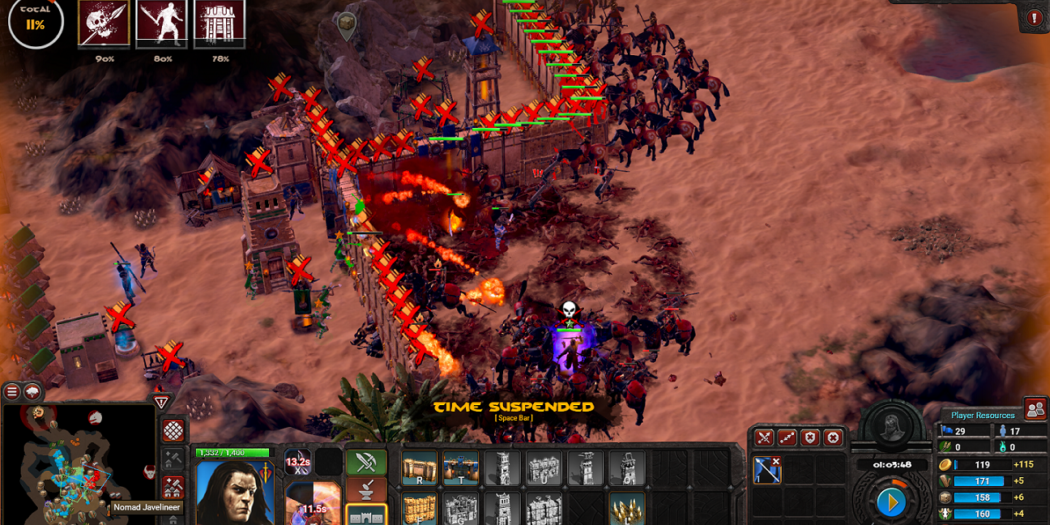 Which wins is up to your personal tastes.

Each round of Conan: Unconquered starts the same: you, whether alone or with one of your best mates, start in the center of a desolate map with a base that needs to be defended and enough starting gold to make more. Over the course of ten, 25, or unlimited waves of enemies, you will build your defenses, economy, and chances of survival.

Your hero units will do most of the heavy-lifting, especially in the early game. There are only two in the base game, and one more is available as day 1 Deluxe Edition DLC (plus a Conan Hero Skin, ebook, and soundtrack for $10). Each one is set apart- Conan swings a slower attack, but its AOE damage is better for swaths of foes. The second hero hits harder and faster, but when her ability is on cooldown, only one bad guy at a time.

Building walls is the name of the game, stalling the AI advance of enemy mixes so that your hero, army or un-manned defenses can churn them into red stew. Whether you’re playing one of the five single-player missions or jumping in for a 2-player co-operative match, everything is the same. Plot, plan, and prepare before the enemy comes, so that when they do, you’re ready.

The enemy variety is satisfying, forcing you to adjust your tactics for most waves to survive. Spiders will crawl over mountains and require traps to be set and ready to stop their advance. Bats fly over walls and can only be hit by ranged attacks. Giant scorpions poison your army, while fire demons (immune to physical ranged attacks) set your walls alight.

Then you have your horsemen, melee spearmen, and ranged javelin units, each abiding by a rock-paper-scissors circle of cavalry-range-melee. These relationships make an incredible difference in damage output, aside from their typical advantages (ranged units can’t hit the horses as many times before they’re in attacking range themselves). Spearmen simply cannot be outdueled by mounted units, which means as long as you’re paying attention and meticulously micro-manage, you can make just a few units go far.

Plans start falling apart, of course, when catapults smash holes in your walls, battering rams tear down your gates, and fire javelins set your buildings ablaze, requiring frustratingly finicky micro-managing to prevent it from spreading while you’re otherwise preoccupied (Note: a post-release edit has made managing fires easier with still-spotty automatic-expunging).

Left untended, fire will tear your defenses down before you know it.

Fortunately, you have every tool you need at your disposal. You just need to be able to afford it.

It took nearly twenty hours for me to fully grasp the economy. Building units requires thralls, which requires hovels, which require gold and food. Building upkeep starts requiring wood, and don’t forget you need enough command flags and space to build anything. Balancing the ten unique resources can be a headache. Just when you’re ready to build your guild (necessary for the next upgrades), you’re suddenly short food, for which you need flags, for which you need gold, and the loop of keeping up begins to hinder your ability to build up your defenses.

At about the same twenty hour mark, I discovered that it was far better to stick around in the lower tiers of advancements and mass ranged units, walls, towers than it was to try and keep my researches up. Ten-wave games barely need heavy walls, while for 25-wave games the last tier is simply unnecessary. Forget about affording everything from the Scholar’s Guild, too: overspending on such frivolities can cost you your entire economy.

Building your base and defenses requires you to make the most of your space. You must decide whether you want more room at the cost of easily moving your units from one side to the next, or closer choke points. The map may always look the same aesthetically, but every new game has completely different terrain at play.

Early game exploration helps you find and plan your bottlenecks and the confines of your base, while later you’ll be sending your heroes and armies out to topple nefarious bosses to acquire powerful artifacts that grant new abilities. Not all of the fights are created equal, nor are the skills. A clone-making ability is particularly effective, while immunity to disease is situationally handy but never as game changing in combat.

Just be careful of what are either unexplained rules or a pesky glitch that makes it difficult to pick up dropped items (while your hero respawns after a minute, his treasures are left beside his corpse until you can fight your way back to them). Also pesky: crashes. After each of my single-player missions (do not expect any story-telling here; plot only comes from the in-game comic’s unlockable chapters), my game crashed. Fortunately, I never had this issue in the middle of a match.

The game can be punishingly difficult when you’re still getting to grips with all its systems, and while there is no “easy” difficulty setting in co-op, you can make resources and chokepoints more plentiful.

There’s an awful lot going on in Conan: Unconquered, especially in co-op, which is why the ability to pause the game while still building, selling, buying, repairing, and commanding is so essential. It’s also part of what makes the two-player matches so fun. Strategizing against the seemingly insurmountable, planning out your next dozen minutes of purchases, and reacting to the marching armies and newly scouted information about what’s to come makes this the collaborator’s dream come true.

Each player benefits from the other’s buildings and researches, and can pass gold easily, even while the game is paused. The tension and constant pausing to understand what exactly is going on and where, exactly, that bat has gotten off to, are what make Conan: Unconquered so much better than its short-comings would have you believe.

Conan: Unconquered isn’t pretty. It comes with its share of unintended glitches and crashes. Audio is uninteresting, and everything visible is only serviceable. The economy can be a pain, and the research tiers could be better balanced to be attainable and worthwhile for ten and 25 wave matches. Units sometimes don’t enter buildings when you tell them to, and pathing and AI can be wonky in the best of times. In one game, an entire squadron of our units simply disappeared for a wave, before materializing again after we’d needed them most.

All that said, I enjoyed every match of Conan: Unconquered, win or lose. Entire evenings would disappear into two to five hour matches (without multiplayer saves) of defense, base-building, and sorties. It’s the co-operative base-building survival game I’ve been waiting for, even without all the polish of my dreams.

There’s not a lot of content in Conan: Unconquered, but like the best of RTS mods, what is here is highly replayable. My advice: bring a friend. It makes all of the glitches, crashes, and late-game performance issues worthwhile. Fighting bots in RTSes is one of my favorite past-times, and that’s all Conan: Unconquered is. Build a base. Fight the economy. And mow down wave after wave of fire demons, disease catapults, and hundreds of spearmen.

After, of course, you’ve figured out how the whole thing works.

Conan: Unconquered is a fun co-op, RTS wave-survival game with an unfortunate selection of technical issues and unimpressive presentation. Patches are already solving problems, so here's hoping the game only gets better in the coming months.

Brutal Gamer's Nintendo Editor began his gaming life a little late- at five years old. But he's made up for it in the two decades since, gaming and writing about gaming with the same passion, fervor, and unrelenting love as his five-year old self.
Previous Sega adds Virtua Racing and Monster Land to Sega Ages line
Next New retro X-Men Marvel Legends hit pre-order