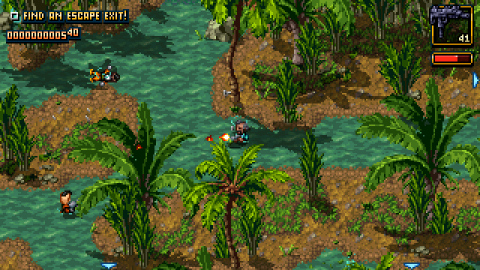 After what seems like forever, Shakedown Hawaii finally arrives this week. That’s good, because there isn’t much else to talk about.

No, this isn’t exactly a busy week on the old Nintendo Download. That’s not to say that there aren’t any good games, just no major releases… well, outside of the title game anyway.

It has been a while, but the long anticipated sorta-followup to Retro City Rampage is finally here. Sporting 16bit-ish looks and some solid options for building an empire, Shakedown Hawaii could be a big winner.

Other than SH though, this is a thin week. There’s Puyo Puyo Champions for those who’re into puzzles, and that’s more or less all that’s worth a mention.

Nonetheless, feel free to scroll down for the full listing.

Jason's been knee deep in videogames since he was but a lad. Cutting his teeth on the pixely glory that was the Atari 2600, he's been hack'n'slashing and shoot'em'uping ever since. Mainly an FPS and action guy, Jason enjoys the occasional well crafted title from every genre.
@jason_tas
Previous Collected Doomsday Clock (part 1) coming this fall
Next PS+ includes Edith Finch and Overcooked for May 2019