Tis the season for ghosts, goblins, and everything else that goes bump in the night. So it’s a good thing that the Ghostbusters are here then.

Does anyone actually dislike Ghostbusters? Now, I realize that’s a semi-loaded question with the somewhat questionable history that some GB tie-ins have had, but overall it’s a beloved franchise. Even a so-so sequel (that I actually really liked), a misguided “reboot”, and some mostly iffy games haven’t dulled the shine of the boys in grey.

Let’s get back to that last point above for a sec, the one about the games. Ghostbusters has had a way more checkered past when it comes to electronic games than pretty much any other form of media. The Xbox 360/PS3 era title was a standout, with the actual cast and lots of cool moments. But past that, what’s there been?

Well, I think it might be safe to add another stand-out Ghostbusters title to that list. Yes, Ghostbusters World is a “mobile game”, but it’s also lots of fun.

When you fire up GBW, you’ll get to make your own Ghostbuster. The creation suite isn’t all that in-depth, not that you were probably expecting it to be. But it is nice to be able to make a kinda/sorta representation of yourself nonetheless.

Once you do that, you’ll get placed on the map thanks to Google Maps integration. Is this starting to sound familiar? Look around you, and you’ll see that specters are everywhere. All you need to do to get started is to tap on one, and you’ll activate the Augmented Reality setup. You’ll see the ghost in front of you, flying around your house (or wherever), and you’ll get to trap it and add it to your collection.

By now, you’re probably thinking that all of this sounds like a re-skin of Pokemon. Too an extent it is, but not completely. 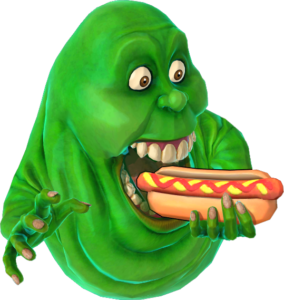 While the gameplay in Pokemon GO doesn’t consist of all that much, Ghostbusters World adds a bunch of new elements to the formula. When you are taken into that AR setting, you’ll pull out your PKE meter. You actually have to hunt for the spirit in the room. Not that it’s all that tough, but it’s a cool little nod to the lore.

Once you find ’em of course, you’ll have to bust ’em. Just don’t keep that stream going for too long without recharging, because your proton pack will run down and you’ll basically have to “reload”. While this is going on, the ghost will be dancing around, vanishing and reappearing, and attacking. If you get too beat up, you’re done. Fortunately, you can counter attacks with a little gizmo from your arsenal.

Get a ghost worn down to a sufficient degree, and you can throw out a trap, then a “capture stream”. That’s that traditional Ghostbusters stream that you no doubt reminder from the movies, the cartoon, and everything else. The one that looks like a lasso. Grab the creep with that, pull them over the trap, and guide them in.

Now, honestly, that’s a good deal of gameplay there. It’s way more than I would have expected from a game like this. Add to that that it’s actually well implemented and functional, and I was more than little surprised. It’s tons of fun to actually use all the gimmicks and hardware that the traditional Ghostbusters have wielded.

Getting new gear isn’t too tough either. You can create your own, buy it using real-world cash, or get stuff from “Dimensional Doors”. These work exactly like the Pokestops in Nintendo’s title, so you know the drill. 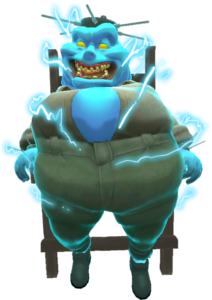 Remember that ghost from the Ghostbusters toy line in the 80s? The one that had the purple body and the giant eyeball in the middle of its head that popped out at you? It’s in this game. So are a good deal of the ghosts from the cartoon, the movies, and even the comics. I spoke to a representative from developer Four Thirty Three way back at SDCC in July, and she told me that they went out of their way to get as many ghosts from GB canon as possible in the game. As with Pokemon, those ghosts range from easy to beat, to downright tough.

Fearsome Flush? That toilet is going to be out of order like lightning. Vigo the Carpathian? Ehhhhh he might take you a while longer. That’s right, there are boss spooks too that you’ll have to battle, and you can actually go multiplayer on those.

There’s more too, like a story mode, and the ability to actually pit your ghosts against other players’ in a little PvP. Feel like reading? Fire up Tobin’s Spirit Guide and check out the bios on all the terrible terrors that you’ve collected thus far. Fun stuff.

As much as I’ve gushed a bit about Ghostbusters World here, it’s not perfect. As much fun as the game might be, there are some weird glitches and other assorted problems that do pop up and spoil the fun. Chiefly among those are some bizarre issues while busting.

Not that it happens all the time, but there’s a pronounced glitch where the positron stream vanishes while firing. You can still hear it, but you can’t see the beam, and it also has no effect on the ghost. I’ve found that actually moving a bit (in the real world) seems to solve the problem, but it’s something that really needs to be fixed. 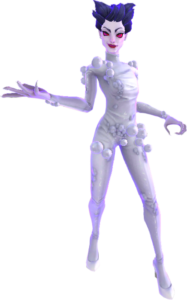 There’s also a bug that shows up while you’re on the “over world”. Just walking at regular speed will occasionally cause an “are you driving” message to appear, and the whole app crashed on me a few times.

We’re ready to believe you

In the end though, none of the problems that I ran into were enough to make me stop playing. That’s not to say that I don’t want to see this all patched, it’s just that none of it completely ruined anything for me.

I’m sure this is partially because I’m a Ghostbusters fan, but I enjoyed the heck out of this game. The gameplay is fun, the graphics are nicely cartoony, and much like Pokemon, Ghostbusters World give fans something to play while out and about.

It’s free, fun, and timely. Go out and grab a copy of Ghostbusters World for Halloween, and I’m pretty sure you’re going to have some fun.

I really like this game. Fun, fast gameplay is built into a game that offers great graphics and loads of callbacks to classic Ghostbusters characters. And hey, it's free and timed to hit right around Halloween. Hopefully, the bugs will get patched sooner than later.

Jason's been knee deep in videogames since he was but a lad. Cutting his teeth on the pixely glory that was the Atari 2600, he's been hack'n'slashing and shoot'em'uping ever since. Mainly an FPS and action guy, Jason enjoys the occasional well crafted title from every genre.
@jason_tas
Previous Episode 50: Same Old
Next Dungeons & Dragons: A Darkened Wish mini-series coming from IDW