See some of DC Comics’ greatest characters and how their powers work, in the fresh tome from Insight Editions and authors SD Perry and Matthew K. Manning.

Comic book super powers are a funny thing. The best heroes often have cool special abilities that give them an edge, like Superman and Martian Manhunter. But these powers have always been a bit of a mystery, with no real (solid anyway) explanation as to how they might work.

Building a hero (or villain)

The aforementioned is a fact that changes wth DC: Anatomy of a Metahuman, from Insight Editions and the team of S.D. Perry and Matthew K. Manning. These writers have put quite a bit of work into creating this volume, which goes in-depth into a few of DC’s biggest heroes and villains. Not to be content with just a book of analysis and theories as to how Superman can fire his heat vision though, they’ve also added a little bit of a narrative to it.

The book is actually a collection of theories, all assembled by one of the DC Universe’s greatest minds, the dark knight detective himself – Batman.

So as you read, you see Bruce’s thoughts on everything, including what he considers “fact” and what he theorizes. You’ll also get a look at supporting material. This is some particularly cool stuff, like a medical report from Pena Duro prison as to the experiments with Venom on one particular subject.

As a big comic book fan in general, and a huge Batman fan, this is all particularly cool to dig into. Batman of course, is known to keep detailed files on not just enemies, but also allies. His paranoia is legendary, and it’s even been the focus of a story arc or two, from time to time.

DC: Anatomy of a Metahuman sheds light into those thoughts, and the reader gets to see just how deep some of this goes. Batman writes about J’onn J’onzz being an important Justice League member, but also mentions him as an equally big threat if he were to turn on them for some reason. It’s interesting stuff, and a cool expansion of the fiction.

In all, by the way, the book gives us a dozen detailed reports on different DCU characters. And lest you think they’re all triple-A heroes and villains, think again. You won’t find Flash and Wonder Woman in here, as the authors have seen fit to include some lesser known, but maybe more interesting, investigations. 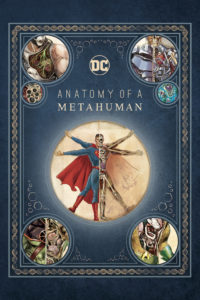 Also, one last note before we get into the art- none of these chapters are broken up into subsections. So you won’t find a Superman section under the main heading relating to his strength, for example. You will see that addressed, along with dives into his weaknesses and possible mental abilities, but it’s written out as if this is a notebook. Remember, this is crafted as a collection of Batman’s files.

Even though that kind of thing usually annoys me, in this case I don’t mind. DC: Anatomy of a Metahuman is written as kind of a story, and all of this works to that end.

If you’re a comics fan, then you know the name Ming Doyle. Around the industry for some time now, Ming has accrued a number of accolades for herself, and is pretty highly regarded. That said, her art does take some getting used to, especially for superhero comics fans.

It’s not traditional, and has more of the look that you’d expect to find in a book that’s not about men from Krypton. That is not, however, meant to be a detraction. Not every artist is perfect for every comic after all. And Ming’s work actually leads itself quite well to a book like this one.

No, it’s not traditional, but this isn’t a traditional superhero book either. The artist is able to put across a feeling of almost seeing something that Bruce Wayne himself sketched into his notes. It’s cool, and continues to build upon DC: Anatomy of a Metahuman already impressive look.

DC: Anatomy of a Metahuman is a nice surprise indeed, and one that I hope will continue on into a series. The book hits all the right notes, and truly does get across the feeling that you’re peering into the work of Batman, as he not only studies his friends and foes, but looks for ways to best them all.

Comes across beautifully, written from Batman's point of view - 92%

The art isn't splashy, but fits almost perfectly for this kind of a book - 87%

DC: Anatomy of a Metahuman is an all together different kind of book. A collection of analysis and theories straight from the mind of Batman, the book lets you in on the proposed inner workings of various superpowers. Written beautifully and with some really cool art, this is one not to be missed.

Jason's been knee deep in videogames since he was but a lad. Cutting his teeth on the pixely glory that was the Atari 2600, he's been hack'n'slashing and shoot'em'uping ever since. Mainly an FPS and action guy, Jason enjoys the occasional well crafted title from every genre.
@jason_tas
Previous PS+ October freebies get spooky with Friday the 13th
Next NYCC 2018: Turok returns to comics, from Dynamite