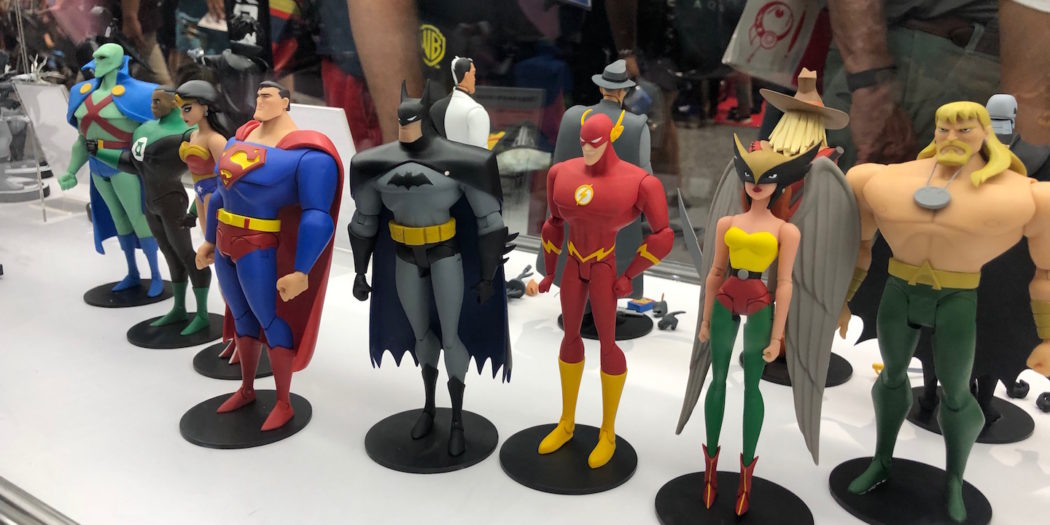 An expansion to the Batman: The Animated Series line, Justice League animated figures, and another look at the Essentials series highlighted SDCC.

As DC Collectibles goes, there are really only two lines of action figures right now. The first is Batman animated, which is coming back pretty strong. That line will have a set of figures coming up that plug the noticeable gaps in the previous offerings.

By that, I mainly mean Scarecrow. While there was a Johnathan Crane figure in the line already, it was one based on his appearance in The New Batman Adventures. The classic look, in my opinion, is a much better one. So it’s great to see it finally appear.

And speaking of “classic”, the original Two-Face design is also finally here, and looks awesome. The new figures bring a vehicular surprise with them too – the Bat-Cycle. Batman’s smallest and most nimble of rides, the cycle comes complete with a helmeted Dark Knight.

The second series that DC has running now (or will soon) is the Essentials series. While Batman is animation, this one is comic-based. Essentials figures are set in the 7″ scale and are basically the spiritual successor to Icons,which was a great but under-appreciated series.

Essentials looks to get off the ground in a big way, starting off with some of DC’s heaviest hitters.

You’ll notice there are also some awesome accessories in those shots, including the Jason Todd Robin suit in a display case. No word on what they might represent, though Icons had at least one accessory pack that I can recall…

Oh, and yes there are Watchmen. The Watchmen line, actually Doomsday Clock branded figures, are in the same scale and have identical detailing as the standard DC figs. So they’ll look great standing next to each other on the old shelf.

And then there’s the League

The above are the only two lines that DC Collectibles has running. Though there is another, sort of an expansion to Batman: The Animated Series. It is, of course, the Justice League.

The hook is that these seven figures are only sold via the new DC Universe membership. the service allows subscribers to watch and read all the DC they want, and also buy into a select series of collectibles made by DCC. The first of those are the Justice League figures.

Cast in the same scale as the Batman figures above, the JL figures will have slightly different stylistic touches. That was true of the show as well, which is still one of the best comic book toons ever. So this Bat won’t look identical to the Bat from DC’s standard line.

Jason's been knee deep in videogames since he was but a lad. Cutting his teeth on the pixely glory that was the Atari 2600, he's been hack'n'slashing and shoot'em'uping ever since. Mainly an FPS and action guy, Jason enjoys the occasional well crafted title from every genre.
@jason_tas
Previous Coming Up: The Games of August 2018
Next SDCC 2018: New sets debut at LEGO, including more Solo, Marvel, and DC