Avengers #8 brings the team to the top of the world

It’s been a tough start for the current Avengers team, but this all-star cast might finally bet ready for a breather in issue #8 (or not).

It’s been a hot start for writer Jason Aaron’s Avengers book, which has re-teamed Marvel’s big three heroes. Not that they’re all there is on this squad, but they’re the backbone. And it’s particularly great to see the Avengers everyone knows and loves on the team.

It looks like we’re going to be getting a steady stream of big stories too, with Namor serving as a villain. That’s awesome too, since he’s been more of a hero for way too long over in the x-books. 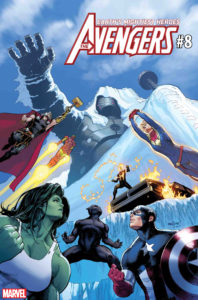 The world has been shaken after the battle against the Dark Celestials…and the new Avengers team is literally on top of the world in their new headquarters, Avengers Mountain. Now that our team of heroes have been fully formed, what does that mean for the rest of the world? This September, a new day will dawn for the Avengers along with a brand new story arc, as celebrated artist David Marquez joins series writer Jason Aaron for an adventure that’s just beginning!

“Dark secrets lurk in the shadows of the Avengers’ new headquarters as the team is finally assembled and ready to face the greatest threats the world has to offer!” teased SVP and Executive Editor Tom Brevoort. “And it’s a good thing, too, because trouble-spots are erupting all over the globe—beginning with an attack by Namor, the Sub-Mariner! It all leads up to and into our big 700th issue in just a few months, as we showcase just why we’re considering AVENGERS the crossroads of the Marvel Universe, the place where elements from every aspect of our far-flung cosmology clash!”

Watch for Avengers #8 on the stands on September 8th.

Jason's been knee deep in videogames since he was but a lad. Cutting his teeth on the pixely glory that was the Atari 2600, he's been hack'n'slashing and shoot'em'uping ever since. Mainly an FPS and action guy, Jason enjoys the occasional well crafted title from every genre.
@jason_tas
Previous Nintendo Download: It’s Battle Royale Time!
Next E3 2018: Check out Dying Light 2 in action