Home / Action Figures and Toys / Mezco adds another Wolverine to its One:12 Collective with Logan

Mezco adds another Wolverine to its One:12 Collective with Logan

The fourth figure in the line based on the character, Logan has just been unveiled by Mezco Toyz. The figure features the civilian identity of the clawed X-Man, complete with alternate “Patch” head.

Wolverine in his street clothes is a classic form for the mutant hero. While all of the superheroes in Marvel’s universe appear in their store-bought duds from time to time, Logan in particular has made a habit of scrapping sans his superhero costume.

I remember many an X-Men comic where he was in pretty much the same exact outfit that he is here, in this new action figure. And there was a whole stretch where he wore an eyepatch too, with no real costume to speak of. That’s reflected here too, with that cool alternate head.

Of course, you also get plenty of other accessories with this latest One:12 figure. Those include clawed hands, a leather-like jacket, and a cowboy hat. Where would Wolvie be without that? He also includes a pair of dog tags, but they honestly look kind of enormous. Let’s hope Mezco finds a way to make ’em a little smaller for the final release.

Speaking of, Logan here will be shipping out in the November to January time frame, this year into next. He’s up for pre-order right now, and will run you $80 USD. 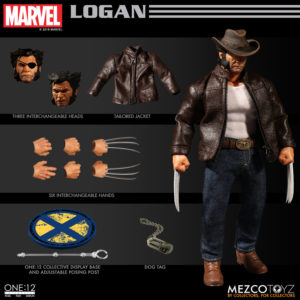 THE ONE:12 COLLECTIVE LOGAN FIGURE FEATURES:

Jason's been knee deep in videogames since he was but a lad. Cutting his teeth on the pixely glory that was the Atari 2600, he's been hack'n'slashing and shoot'em'uping ever since. Mainly an FPS and action guy, Jason enjoys the occasional well crafted title from every genre.
@jason_tas
Previous Nintendo Download: Dillon Rocks, and Rolls, in His Return
Next Bandai Namco celebrates a year of Tekken 7 with free downloadables