It’s as very special Friday the 13th, because Jason is coming home. The One:12 Collective version of the famed movie series’ main monster is available to pre-order from Mezco Toyz.

If you’re a horror fan, then you’ve gotta love what Mezco is doing with it’s One:12 Collective line. Mainly a superhero series of figures, they’ve got a really nice little horror sub-line happening. So far, we’ve seen Ash (from Evil Dead II), the Ghostbusters (if you consider them horror), and Michael Meyers, though all of the above are still in the pre-order state. The classic Boris Karloff Frankenstein however, has been available for a while. And now, we’ve got the ultimate slasher – Jason.

This version of Mr. Voorhees is from Friday The 13th Part 3, and is designed to reflect his look from that film. As such, he includes a ton of weaponry, but also an extra head with a massive and bloody gash, and a cracked hockey mask. Pretty wicked.

You can pre-order a Jason for yourself right here. He’s scheduled to ship out in the October to December timeframe. 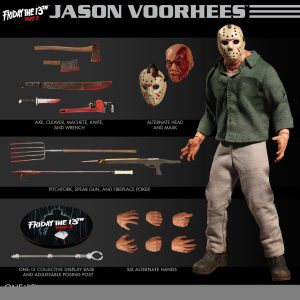 Jason's been knee deep in videogames since he was but a lad. Cutting his teeth on the pixely glory that was the Atari 2600, he's been hack'n'slashing and shoot'em'uping ever since. Mainly an FPS and action guy, Jason enjoys the occasional well crafted title from every genre.
@jason_tas
Previous Sea of Thieves Adventures: Playing Rare’s Return
Next April 18th Valiant Comics Previews: Quantum and Woody, Ninjak vs Valiant