Thor joins the list of new Marvel number ones

Thor is back. No, not that Thor, the other one – the “real” one. The Odinson. And this sounds like one series debut that you are not going to want to miss.

Thor Odinson has regained his mantle! And he’s got a wild new world of trouble on his mighty hands. The artifacts of Asgard have been scattered across the earth, and to reclaim them, Thor 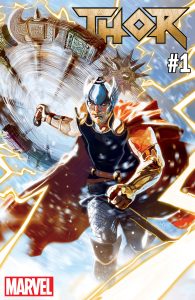 will have to face some ugly truths. Like the production cost on hundreds of new hammers! And the Thunder God is going to need every last one of them if he’s going to stop the unstoppable Juggernaut. Jason Aaron takes the Prince of Asgard in a whole new direction with YOUNG GUN artist Mike Del Mundo joining him at the helm! And don’t miss the latest chapter of the King Thor saga with acclaimed BLACK BOLT artist Christian Ward, as the Thor of the far future encounters an old friend who’s undergone some startling changes.

If I could have scripted the thunder god’s return, it would have gone something like that synopsis. We’re getting a world-spanning adventure for his first arc, and one that sounds like a purely fun action romp. On top of that, we also get him squared off against one of his toughest opponents – the Juggernaut.

Far and away, the Thor arc that I remember most fondly from the 90s was one where he battled Juggy. I don’t think it was a major storyline, but man was it cool. It was all out action from what I recall, and I absolutely cannot wait to see it again.

I could probably do without the “King” stuff, but I’m not going to complain too much. After years of not having him in the feature spot, it’s just good to have the god of thunder back under his own banner again.

Jason's been knee deep in videogames since he was but a lad. Cutting his teeth on the pixely glory that was the Atari 2600, he's been hack'n'slashing and shoot'em'uping ever since. Mainly an FPS and action guy, Jason enjoys the occasional well crafted title from every genre.
@jason_tas
Previous Payday 2 hits the Nintendo Switch this week
Next Wild Guns now available for pre-order, lands on Switch this April