DC’s mega-event is building towards a multiverse-shattering end, but first Metal is welcoming back an old friend. Maybe you’ve heard of the Martian Manhunter?

The hunt is on

Okay, so I’m officially pretty pumped for this one. I’ve been hoarding Metal issues, more or less waiting till it comes to a close before I read them all, but issue #5 is about to make me break that plan in half. That’s because I cannot, in any way shape or form, wait to read the Martian Manhunter’s return to DC prominence.

He’s always been a favorite character of mine, though I’m hardly alone in that. J’onn was a DC stalwart, and a staple member of the Justice League. Well, he was until the New52 anyway. At that point the history of the League was changed in a few big ways. Most notably to make DC’s biggest heroes now the founding members. And that somehow resulted in the removal of the Manhunter for a substitution – Cyborg. 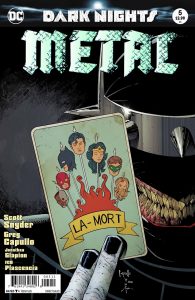 Now, as a result of that I actually have become a pretty big Cyborg fan, so I guess the plan worked. But even so, J’onn has been sorely missed in the DCU. True, he’s popped up from time to time, but not in all that major of a way.

This however, feels different.

Metal is a huge event for the publisher, and it’s got a creative team that includes Scott Snyder, a writer who doesn’t make big moves lightly. If he’s brought the Manhunter back, then it probably means that he’s going to be sticking around. Fingers crossed.

Anyway, this issue of Metal includes a load of awesome stuff, and that’s just from reading through the preview. There’s Mister Terrific, Green Lantern (Jordan), some really cool Plastic Man stuff (seriously), and an aged Batman looking to end things at the Forge.

Spoilers abound obviously, so click the link to view the preview at your own peril.

Jason's been knee deep in videogames since he was but a lad. Cutting his teeth on the pixely glory that was the Atari 2600, he's been hack'n'slashing and shoot'em'uping ever since. Mainly an FPS and action guy, Jason enjoys the occasional well crafted title from every genre.
@jason_tas
Previous Sonic the Hedgehog board game coming up from Shinobi 7
Next Oswald returns to King of Fighters as KoF XIV’s latest dlc combatant