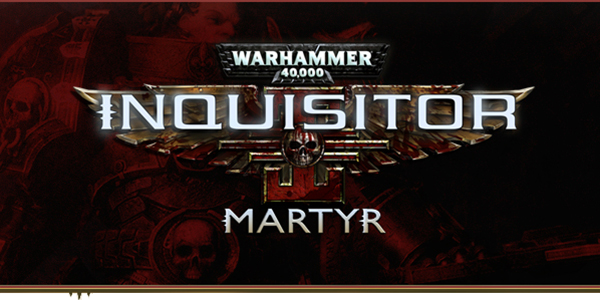 Home / News / Have a look at the intro cinematic for Warhammer 40K: Inquisitor – Martyr

Have a look at the intro cinematic for Warhammer 40K: Inquisitor – Martyr

Bigben and NeocoreGames have taken the wraps off of the introduction video to their Warhammer 40K action/RPG. It doesn’t show much, but Inquisitor – Martyr is starting to look like a game that fans will want to check out.

We still haven’t seen much gameplay from Inquisitor – Martyr. And yet it somehow manages to stay interesting and more than a little tantalizing for 40K fans. There are a few reasons for this, not the least of which is the fact that it’s coming from Neocore.

They’re the company that produced the Van Helsing games. And Inquisitor – Martyr is being billed as an action/RPG. That could mean that it’s set to bring the Van Helsing style of gameplay to the 40k universe. Not only would that be a first (I think) for the IP, but it could be pretty freaking awesome.

It’s been a while since we’ve seen a good, single-player, campaign driven game in 40k after all. And -fingers crossed- this could be just that. At any rate, the intro looks and sounds pretty neat, so there’s hope.

From the sound of things, Warhammer 40k: Inquisitor – Martyr might be one to watch for when it hits the PS4, Xbox One, and PC sometime this year.

Warhammer 40,000: Inquisitor – Martyr is an Action-RPG that takes place in the Warhammer 40,000 universe. The player is an Inquisitor in the Caligari sector, a region infested by heretics, mutants, treacherous Xenos, and the daemons of the Chaos Gods. The game is playable in single-player as well as in co-op online for up to 4 players, and lets you progress in a persistent world over numberous missions with various objectives. You play as one of three complementary classes in destructible environments that provide cover to help you survive combat that is both tactical and brutal.

Jason's been knee deep in videogames since he was but a lad. Cutting his teeth on the pixely glory that was the Atari 2600, he's been hack'n'slashing and shoot'em'uping ever since. Mainly an FPS and action guy, Jason enjoys the occasional well crafted title from every genre.
@jason_tas
Previous Frank Miller’s Xerxes coming up this April from Dark Horse
Next Nintendo is Getting Cardboard Peripherals and…uh…