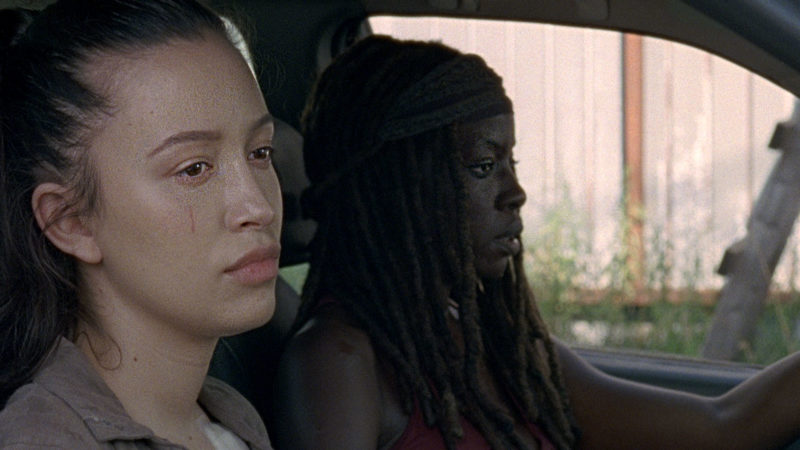 As we draw ever closer to the midseason finale of season 8 of The Walking Dead, we see groups of survivors desparate to win, do what is right and hold on to the compassion of a world reminiscient of before the apocolypse. This episode focuses on the trials and tribulations of some of the leaders, while giving us a look at an all new characters.

Ezekial (Khary Payton) has a pretty small role in this episode, He is still reeling after getting his beloved tiger, Shiva, killed. More impartant than Shiva, though, are the scores of Kingdom soldiers who fought and died for Ezekial.

Ezekial is cooped up in his keep. Carol (Melissa McBride) tries to get him to come out. When he refuses to answer her, she walks away, followed by a child whose name I am forgetting. She tells him not to follow her, but surprise, he does anyway.

The next scene we see is this child, he is about to get chomped by some walkers. Carol saves him, and then asks him why he followed her. He insists she train him to fight and says he knows how to use a gun from watching her train others. Carol relents.

By the end of the show, Carol returns to Ezekial’s keep, intent on entering. She raises her shot gun to blow the lock off of the door when she is informed that the door isn’t actually locked. Carol and Ezekial have an important conversation about what it means to be a leader. The Kingdom’s forces are supposed to meet Rick at an appointed location.

Jesus (Tom Payne) led back a contingent of Savior soldiers at the end of his last featured episode. With 30 saviors in the backyard, Maggie needs to figure out how to deal with them.

Gregory (Xander Berkely) immediatly suggests killing them all. Jesus doesn’t like this, and pleads to Maggie that they cannot kill the prisoners. They are building for something better. Following her better instincts, Maggie creates a pen-like enclosure for the prisoners, and puts Gregory in with them for good measure.

One Savior tries to make trouble, but another Savior stops him. It seems that this second Savior knows that change is coming and wants to work with the new people on top.

Rick (Andrew Lincoln) has a very short part in this show.

In the opening moments, Rick, Maggie and Carol are reading eachothers’ notes, with updates on their portion of the war.

Rick tells them that he is going ahead with the plan, and that is all we get for a bit.

Remember the garbage people from last season? They betrayed Rick and company after the group worked to get them guns? Well, they are back!

Rick apporaches the trash people and tells them that he wants a new deal. The group wonders why he came alone after they tried to shoot him, betrayed him and killed his people. He offers a simple ultimatum: They work with Rick’s people, or Rick’s people destroy them. The leader lady denies this offer, and Rick is herded into a cargo container, like the one from the end of season 4 (It is even branded “A”). 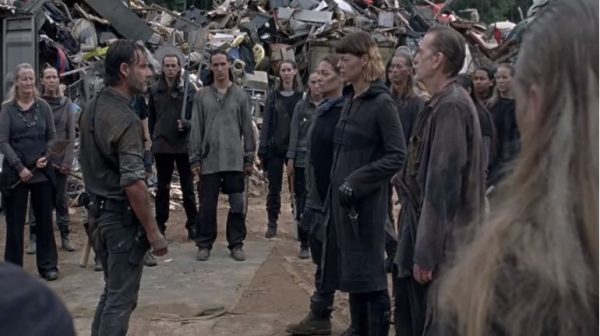 Carl (Chandler Riggs), doing who knows what, comes across the man from a few episodes ago. This is the guy who was begging for food or water when Rick shot at him to scare him away.

Carl speaks with him and learns that his name is Siddiq (Avi Nash). Siddiq becomes important in the comic, but this is his first real sighting in the show.

The two begin traveling together and talking. We learn that Carl plans to bring Siddiq back to Alexandria. The two have a close encounter trying to put down walkers to honor Siddiq’s mother.

Rosita (Christian Serratos) and Micchone (Danai Gurira) have misgivings about what is going on at the Sanctuary, so the two set out to see it witrh their own eyes. They eventually come across a building with two saviors inside. They hear them talking, and realize that the situation at the sanctuary is indeed serious. They get seen, and Rosita captures one of the men with a rocket launcher pointed at him. She blows him away, and it is pretty rad.

The other savior gets in a truck loaded up with speakers, meant to draw the walkers away from the Sanctuary. As she is escaping, a truck driven by Daryll (Norman Reedus) crashes into the side of it. Yay, perfect timing in television!

This was a dense episode. A lot happened in a pretty short amount of time. There are moving parts everywhere, and the finale is getting set up very nicely.

The only thing I have to add right now is that I really hope that the war wraps up in this half season, but I know for a fact it will not.

Erich was introduced to gaming by his grandfather before he could walk. Since then, he has grown up loving Nintendo and most games in general. He couples his love of videogames with journalism to cover news, provide reviews and tell it how it is in the gaming world.
Previous RASPUTIN: THE VOICE OF THE DRAGON #1 (Comic) Review
Next Check out this cool mini-doc for Marvel’s X-Men tale, Phoenix Resurrection