For all intents and purposes, a Mario and Rabbids team-up should be a kind of iffy thing. I mean, Mario is classic and all, but the Rabbids? They’re two-bit semi-villains from Rayman. As much as I dug Rayman in general, the Rabbids were never really high on my list of cool stuff.

Even so though, I have to admit that I’m overly excited for Kingdom Battle, which arrives on the Switch this Tuesday. Not only do you get to create a team of Mushroom Kingdom regulars and Rabbid imposters, but it’s a strategy title. How many of those has the Mario franchise played host too? Right. 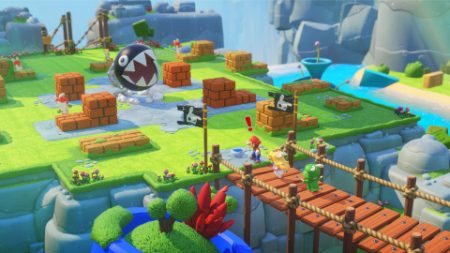 So it’s unique. It’s also colorful, and looks to be loaded up with goofball humor and that signature Nintendo magic. Even though, you know, it’s not technically from Nintendo. Nope, Mario + Rabbids Kingdom Battle is a Ubisoft title. And that’s kind of unique too really.

Now, this is a big game for the Switch, but if you’re not into it for some reason then there’s little else this week. There is a kind of neat looking little Metroidvania called Forma.8, and puzzler, but that’s it. Oh wait, forgot the Neo Geo game of the week, it’s Puzzled. So yeah.

Jason's been knee deep in videogames since he was but a lad. Cutting his teeth on the pixely glory that was the Atari 2600, he's been hack'n'slashing and shoot'em'uping ever since. Mainly an FPS and action guy, Jason enjoys the occasional well crafted title from every genre.
@jason_tas
Previous The Art of Rick And Morty (Book) Review
Next The BG Game of the Month for July 2017 is Splatoon 2