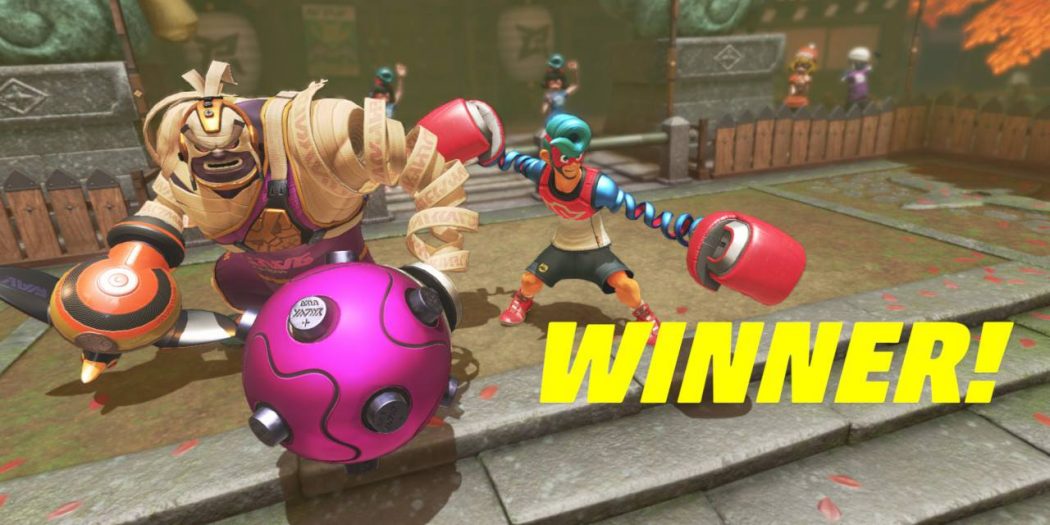 While a learning curve separates motion controls from mobile play, everything is in its place for the Arms Global Testpunch.

Arms is the latest in stylish new IP from Nintendo, a brawler that simplifies fighting mechanics, in a nutshell, to three attacking options (right punch, left punch, and grab) and a handful of defensive options (blocks, jumps, and dashes).  Spacing, timing, and momentum are key, as they are in the much more complicated genre staples.  But there’s no complicated combo-strings or button combinations.  Punch right, punch left, or punch both- that’s your bread and butter. 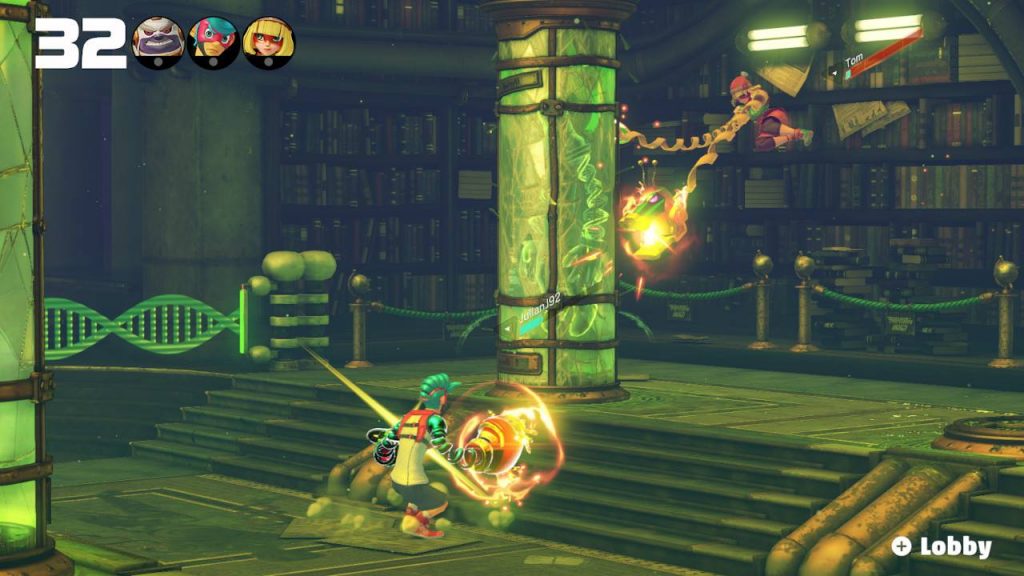 Things become more interesting when you add in the number of characters and their vastly different abilities (Ninjara’s ability to disappear when dodging makes him great at countering, and while Master Mummy’s sheer size is not ideal in FFAs, his ability to heal while blocking can be invaluable when the attention is off of you).  Countless selections of “arms” helps, too.  Think of each as a super-powered boxing glove.  A rare few even look like boxing gloves, like the Sparky, which can shock opponents and leave them open to attack.  Some are less straightforward.  The Dragon doesn’t spring out all the way at your foes, instead firing a delayed beam that’s especially useful when set up by space-controlling arms like the Ramram.  The Global Testpunch features a standard three arms per character, but still gives you an idea of the variety and effectiveness of each.

While the three characters announced with the latest Nintendo Direct aren’t available for hands on, the seven available give you more than enough to play around with.  My personal favorites were Minmin, whose back-flipping kick ability was useful for opening up counter opportunities, and Master Mummy, whose sheer weight made me feel like I had the best of every situation (even when I didn’t). 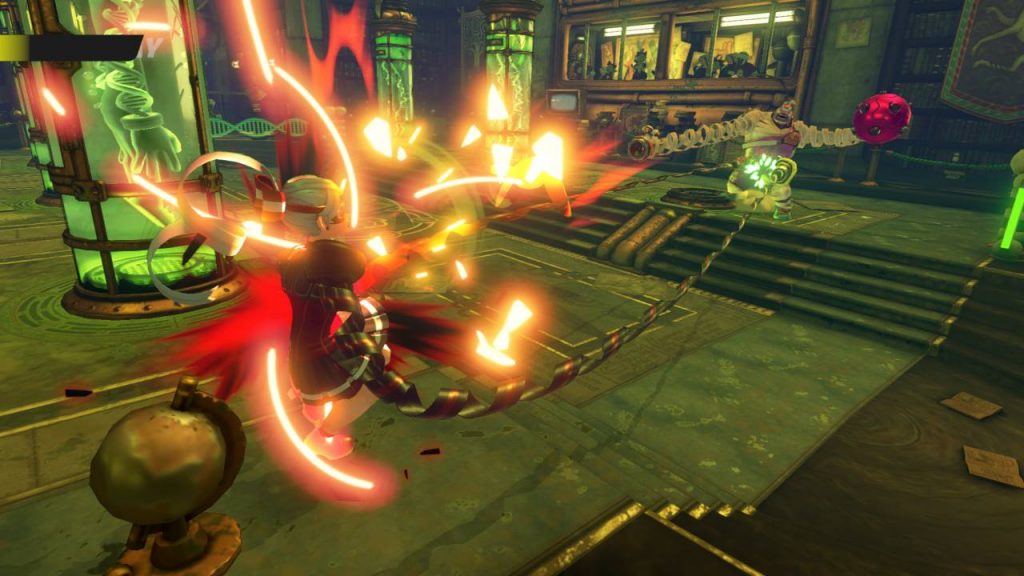 I played using the motion controls during my hour of play, holding one Joycon in each hand (I recommend the wrist-strap add-on, not because you’ll necessarily be chucking your controllers, but because the added form makes for a more comfortable grip).  I didn’t have any detection issues- if I punched with my right arm, my character would punch with his right arm.  For better or worse, the arm’s curve matched my own.  In the first few matches of play, I would often inadvertently send a heavy arm slowly (and safely- for my opponent) in the wrong direction.  By the end of the hour, though, my fists were flying where I meant them to (again, for better or worse).

That hour of play, however, showed me my failings with the motion control.  Moving forwards and back requires tilting the wrists forward or back, which is a stretch at best (mildly uncomfortable at worst).  You’ll be doing a lot of moving forwards and back, and side to side.  There seemed to be a definite difference in the sheer actions per minute and smoothness of maneuverability between players on controllers and players using motion controls.  It’s why I ended up sticking with Master Mummy in the first place- a walking tank doesn’t need to move much.

Sometimes, when players moved laterally at great speeds, it felt like every punch I threw was off the mark, no matter how much I curved it.  Characters have to turn to face their foe before punching, especially after having been knocked down.  Sometimes, it doesn’t seem fast enough- leading to several matches where I couldn’t even position myself to properly face my opponent and took a hard chunk of damage for what seemed to be out of my control.

Many Ways to Play 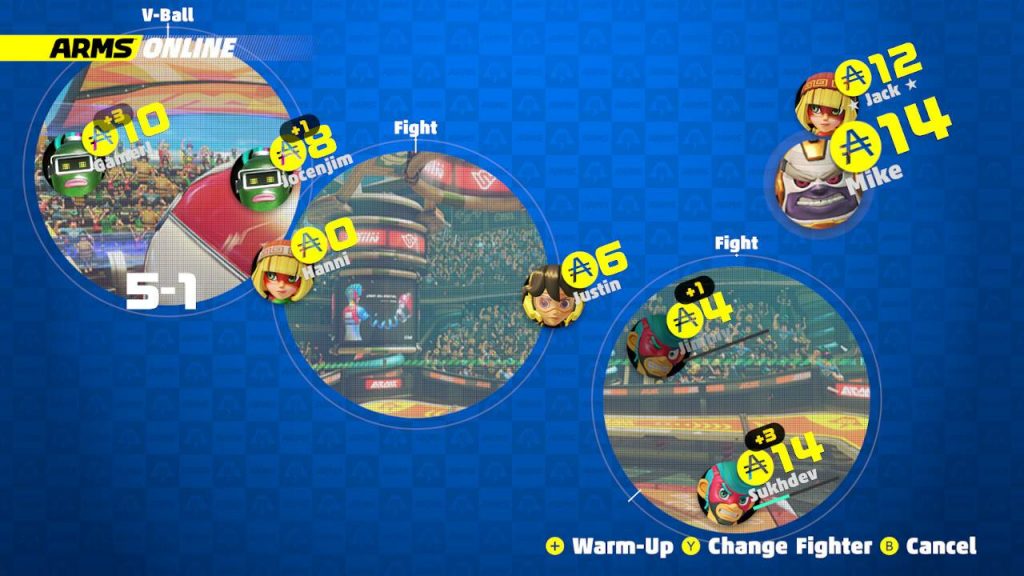 The Global Global Testpunch had several modes on offering.  Once you enter a public room, you and nine other consoles are put into random bouts together.  I enjoyed the lobbies, and the ability to see how many coins people had stacked up (three per win, two per draw, and one per loss) over their time in the room.  Often I used that to indicate who I would target in a three-player free for all.

Which is just one of the battle-types that you could end up in.  The standard one versus one fights are excellent, forcing you to show your superiority in spacing, maneuverability, offense, and defense.  Three player Free for Alls were a blast as well, and made positioning a priority (you don’t want to get stuck between two opponents). Two versus two matches were probably my favorite.  Players were tied together, meaning if you threw one opponent, you’d send both flying. The best teams I found combined a Master Mummy or Helix with a quicker player, like Ninjara or Ribbon Girl, for a balance of offense and defense.  Players have to be mindful of their teammates as well, because friendly fire can stop your ally’s attacks and leave him open to a flurry of fists.  Lastly, one versus one or two versus two V-Ball mixes things up, having players punch a bomb back and forth over a net until it explodes.  These matches rarely went on for more than four to six points due to the match timer, so don’t expect a full-set with epic comebacks.

Hit the Global Testpunch Yourself 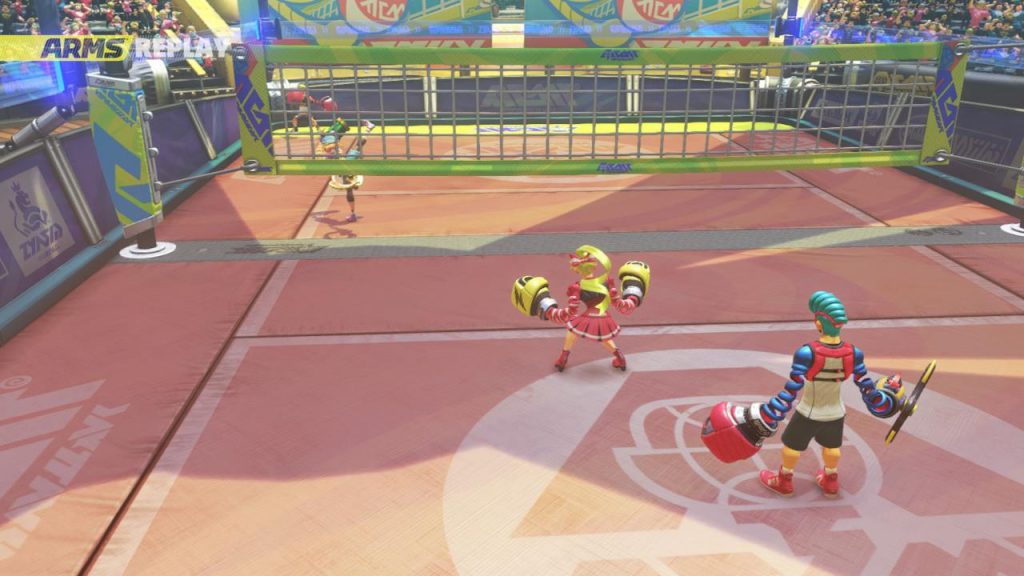 Next week, V-Ball will be replaced with Hoops, which will see players dunking each other in a basket-ball game.  We’ll let you know how that goes, or you can be sure to hop on yourself.  The Global Testpunch is a free download.  Next weekend’s start times (each lasting for about an hour) are the following:

Overall, I really enjoyed my first weekend with the Global Testpunch.  While I’m tempted to put more time in on a controller, I’ll probably end up sticking with the motion controls.  Hopefully I can adjust to the awkward movement and master a more mobile fighting style so that I can get the most out of the other characters.  Otherwise, I’ll master Master Mummy and the defensive, slow advance (I find being grabbed helps close distance) that worked so well for me this weekend.

If you aren’t able to join the Global Testpunch this coming weekend, you can rest assured the wait won’t be long.  Arms launches on June 16, 2017.

Brutal Gamer's Nintendo Editor began his gaming life a little late- at five years old. But he's made up for it in the two decades since, gaming and writing about gaming with the same passion, fervor, and unrelenting love as his five-year old self.
Previous One:12 Collective Shazam (Action Figure) Review
Next Check Out The Ultra-Durable Corsair K68 Keyboard