When we left off, Killer Frost was being approached by Savitar, and Flash had run to the future to learn how to stop him. Let’s see what happens in The Flash I Know Who You Are.

The last episode ended with a dynamic staredown between the two speedsters: The Flash, fastest man alive against Savitar, the self-proclaimed speed god. Flash claims to know the identity of the man behind the armor.

Joe and Cecile get in from a New Years Resolution run, and falling into the joys of being a cute couple, when Joe gets a call and has to leave to join the gang at STAR Labs. Barry is informing the team that hey need to find theoretical physicist Tracy Brand, as she was the one that helped him imprison Savitar in the future. 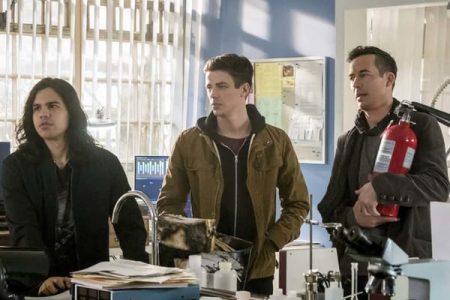 Julian is trying to wrap his mind around why the team is giving preference to the physicist, and why Wally has left to be with Jesse on Earth-3. Cisco reminds him that the speedsters have run multiple laps in search of the ice queen, satellites are running search scans, apps and facial recognition are being utilized. Killer Frost has made herself impossible to find.

Their theoretical physicist is presently a grad student, so they have an idea where to find her. Barry, Cisco and HR head off to the local college campus, to see what ms. Tracy Brand is working on presently. Barry notices the smell of gas coming from one of the labs.

Tracy has failed her dissertation, and is now setting physical copies of her work aflame. She is preparing to head to a fast food joint for a disappointing career change, when Barry menitons a theory that Brand has not released publicly yet. Before he can explain how he knows of it, everyone notices some glass panels beginning to freeze. Killer Frost is working to stop them.

Barry is able to reposition Tracy out of the way of one of Frost’s ice projectiles, before being hit by one himself. Cisco recieves a frozen blast as well, before Barry utilizes a torch and some speed to project a fireball in the direction of their attacker.

Back at CCPD, Tracy describes for the sketch artist of Frost’s appearance. Caitlin has officially begun fighting against Team Flash, no longer along side them.

Cecile wants to discuss relationship details with Joe at the office, while Tracy asks for directions to the bus stop. She needs to practice her ‘would you like fries’ if she is going to work fast food.

Barry tries to convince Brand to stay at the police office for awhile, near Joe for her protection. She thinks this was just a random attack, and does not need the protection.

Somewhere across town, Killer Frost is being chided by Savitar for letting Tracy Brand get away. Savitar told Frost where to find Tracy, as well as who would be there. She can be a god just like Savitar, though she needs to kill Tracy first.

At Jitters’ Coffee Shop, Tracy has misplaced her loyalty card, and HR offers to buy her coffee. He goes on to tell her about how they are interested in her theories, with Cisco feeding the terminology to him through an inner-ear radio.

While HR is trying to convince Tracy to help the team, Julian enquires why Cisco hesitated from taking a shot at Killer Frost, which could have very well given Team Flash the upper hand in that showdown. Cisco does not appreciate being questioned, and redirects the focus to their surveillance of HR.

Nearby, Joe and Barry are discussing Joe’s relationship with Cecile, and when or how he wants to handle bringing her in on the knowledge of Team Flash. And Tracy begins to share with HR her studies of the speedsters and theory of the Speed Force. The conversation is cut short when HR’s coffee turns to a coffee cube, and they are attacked again.

Flash stops the attack before Frost can have her way, and the two begin to travel through Central City. Flash chases Frost back toward Vibe, where Cisco is unable to attack Caitlin, yet again. For his failure, Barry gets the ice attack, being stabbed by Killer Frost, to slow him down. 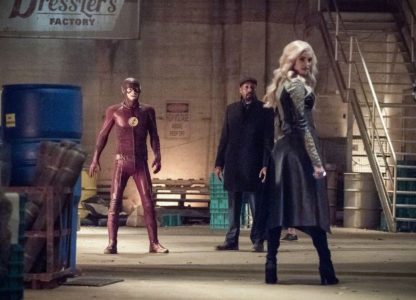 Over at STAR Labs, Barry and the gang are filling in Tracy on the specifics of how the speedsters do what they do, and how they are racing against time with Killer Frost and Savitar causing problems.
This conversation is confirming Tracy’s theories on the speedsters. They show here a glimpse of her future, and approach Tracy about building the speedster trap that they require in order to stop Savitar.

Learning that HR convinced Tracy to help the team, Julian approaches Cisco again. Why is he unable to stop Caitlin / Killer Frost? Cisco admits he does not stop her, because he is afraid. Afraid he will be unable to control the extent of his powers, and kill his best friend. He would rather die then end her life.

Cecile finally tracks down Joe after the crazy day they’ve had. Joe informs Cecile that knowing how he feels, and what views as the complications in his life, that it would be better if they call things off. Back to Captain Cecile and Detective Joe. As soon as Cecile leaves, there is another knock at the door. Frost has Cecile captive. She wants Tracy for Cecile, otherwise things do not look good for Cecile.

Julian reminds Cisco that his powers come from a place of love, not any evil feelings. When Barry and Tracy meet with Frost, she is able to recite Barry’s responses in the same timeframe that he does. Savitar has provided her with everything she needs to know, including the location of Barry’s teammates. She hits Cisco with a small bomb and narrowly misses hitting Joe with an ice attack. Flash takes the ice hit, and Cisco has a standoff with Frost, knocking her unconscious before she does any more damage.

Savitar arrives and rescues Frost from Team Flash, stating his ‘ascension is nearly at hand’. Luckily, Cisco was able to draw some of Frost’s blood before she was taken. They may be able to produce a cure for her. Time is running out. Tracy Brand seems to be narrowing in on how Savitar is able to travel so fast, and how she can use that against him. And Joe and Cecile are able to patch things up, re-emerging better than ever. Cecile now knows the identity of the two speedsters.

Everything that is going on around Barry is causing him to recognize things that had been said and overlooked. Barry calls out Savitar, admitting he knows the god’s identity. With this, Savitar kneels and removes his armor. Barry’s misunderstanding was that Savitar’s comment was “I am the future, Flash.” In reality, Savitar never hid the truth, “I am the future Flash”. Savitar is a future incarnation of Barry.

Cheers to the team behind Flash for bringing this classic arc to the series.

There have been plenty of theories regarding the identity of Savitar this season. Some were closer than others. Personally I think it’s a classic move to be faced with a bigger, stronger version of yourself, void of all the insecurities that we typically carry with us. Stories going back hundreds of years present with a ‘mirror challenge’: being able to overcome yourself, before you can truly harness the strength of your abilities. Cheers to the team behind Flash for bringing this classic arc to the series.

A fan of media on multiple platforms, I am always watching or playing something! Who knows what I will be on to next?
@mackeyp42
Previous New Crash Bandicoot trailer and info spins out of Activision
Next Immortal Redneck (PC) Review