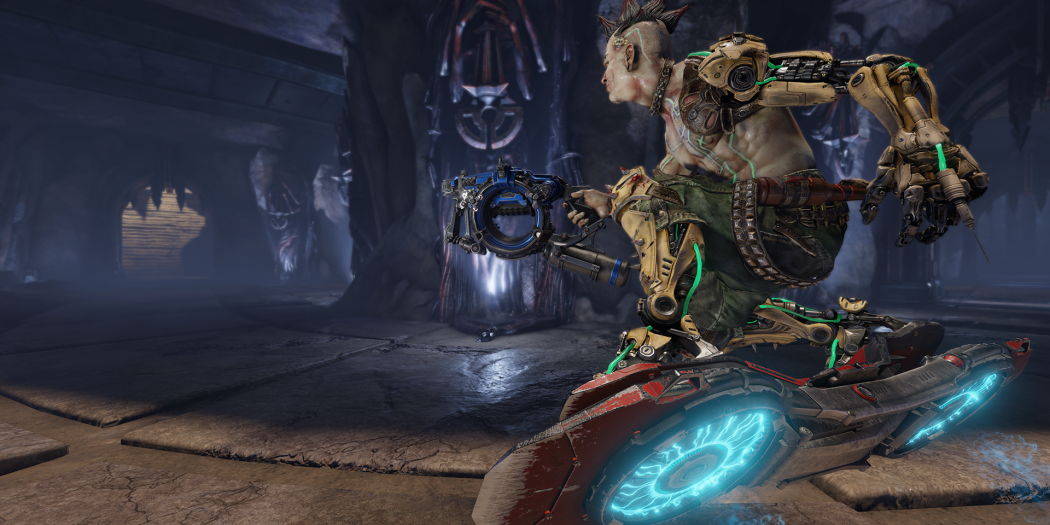 Quake Champions, the new multiplayer-only shooter from Bethesda, looks to have a pretty interesting set of playable characters if Anarki here is anything to go by.

I have to admit, I’m not the biggest fan of what Bethesda is doing with Quake. I’m a single player gamer first and foremost. And with that in mind, believe me when I say that I’m not a fan of multiplayer, online stuff anymore. I was a huge follower of the sub-genre in the 90s, but that was then and I just have no time at all to ‘get good’ anymore.

Still though, I also can’t bring myself to say a bad word about Quake Champions. It might not be for me, but man does it look great. In fact, the more I see of it, the better it looks and the more I’m warming up to it.

What else can I say, since the game has some stunning looking graphics, fast as lightning action, and a very interesting cast of characters. Take Anarki here, with his hoverboard, jetting around the skies of Quake Champions. I mean that’s just awesome and could make him a very unique character in QC’s stable.

Passive Ability – Hoverboard Air Control: Anarki’s hoverboard is a brutal bonus. Anarki is already one of the fastest Champions in the game, but the hoverboard means he can actually gain speed as he strafe-jumps around the Arenas, reaching a ludicrous velocity. In addition, his hoverboard awards a special Passive Ability that allows players more control in mid-air to turn sharply and chase down enemies or escape those who dare follow him up a jump pad.

Quake Champions hits the PC some time this year, and will have a closed beta that’s on the way soon. Sign up for that here.

Jason's been knee deep in videogames since he was but a lad. Cutting his teeth on the pixely glory that was the Atari 2600, he's been hack'n'slashing and shoot'em'uping ever since. Mainly an FPS and action guy, Jason enjoys the occasional well crafted title from every genre.
@jason_tas
Previous Black Hammer Volume One: Secret Origins (Graphic Novel) Review
Next Two decades after their first crossover, the Turtles are once again meeting Usagi Yojimbo