The Legend of Zelda: Art and Artifacts (Book) Review

One of the greatest video game series’ of all time gets another fantastic art tome from Dark Horse. The Legend of Zelda: Art and Artifacts is pure gold.

A treasure trove of art

Dark Horse knows art books. They just do. I have a bunch of them in my library, and honestly, I don’t see myself not buying anything coming up. Their stuff is gorgeously done, well laid out, and generally has some of the highest production values I’ve seen.

So, you’re going to have to keep that in mind while I fawn all over The Legend of Zelda: Art and Artifacts. Still, my fandom aside, I think you’ll find this book as much of a winner as I do.

The reasons for that are two-fold.

As I mentioned, Dark Horse’s books are generally pretty darn high quality affairs. This one doesn’t break that streak. In fact, it amps things up.

Art & Artifacts is 424 pages of fabulously laid-out imagery. It’s a beast of a book that’s impressively hefty and thick. The hardcover is equally impressive, as it bears the crest of Hyrule in gold, set against the deep red of the cover itself. It’s almost a shame to put it in a bookcase, as it’d probably look pretty great on a single-book stand, shown off all by itself.

Once you crack that cover, you’ll find the pages are cast in an unusually heavy stock. Flipping through, I actually had to check on more than one occasion if I’d thumbed past several pages at a time in error. You don’t find that a ton in books at all, let alone an art book based on a video game series. It’s an example of the heavy attention to detail that Dark Horse puts into their stuff, and it’s much appreciated. 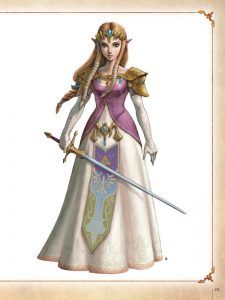 We’ve already had Hyrule Historia, the retelling of the stories that have come before in The Legend of Zelda series. That tome was a landmark, coalescing of all the various timelines into one to rule them all. So, bottom line, that’s not what you get here.

What you will find, and the other half of what makes this a Zelda book to remember, is one of the finest collections of LoZ artwork anywhere. You’ll find promo pieces galore, a comprehensive collection of box art, stuff taken from the instruction booklets, character illustrations from every era of Zelda… Seriously, think of a piece of Zelda art that you’ve seen in the past, and it’s probably in here.

And I mean every era by the way. There’s something here for every kind of fan, no matter which style of Zelda game you prefer. If you love the classics from the glory days of the NES and SNES, then you’ll find those clean, simple illustrations of that day here. Likewise, if Twilight Princess and Skyward Sword are more your thing, then you’ll find more than enough of the lavish modern Zelda illustrations to gawk at.

Going one step further, Art & Artifacts even includes pixel art from the 2D Zelda titles. And I’m talking full stables of imagery here- everything from Link down to a Pols Voice.

A piece of history

Take those two things into consideration and you have a book that really shouldn’t be missed by Hyrule fans. For that matter, Nintendo fans in general should love this one, as there’s plenty to look over from the company’s glory days. Needless to say, that nostalgic glow is present in a big way.

Oh, and there’s even some stuff to read for those who get tired of the pretty pictures. Art & Artifacts has bits and bobs about the various pieces sprinkled throughout, and interviews with the artists. So there’s more than likely something to learn here too, even for the most seasoned Legend of Zelda fan.

An epic adventure of a book

The Legend of Zelda, probably more than any other Nintendo property, has a seriously excellent history of art. From the early days when the look was simple and childlike, to the much more adult and detailed modern era, it's almost all memorable too. The Legend of Zelda: Art & Artifacts celebrates this legacy, with loads of high quality work included from every era, and a presentation that's second to none. Maybe the only "down" note would be the limited amount of content from the brand new Breath of the Wild. But honestly, it's kind of awesome that the latest LoZ is in here at all. Bottom line - this is a book that should probably find its way into every Zelda fan's collection.

Jason's been knee deep in videogames since he was but a lad. Cutting his teeth on the pixely glory that was the Atari 2600, he's been hack'n'slashing and shoot'em'uping ever since. Mainly an FPS and action guy, Jason enjoys the occasional well crafted title from every genre.
@jason_tas
Previous X-Men Prime #1 (Comics) Preview
Next Halo Wars 2 (Xbox One) Snapshot Review