We left the last episode with Barry telling Wally a frightening bit of information regarding his role in saving the future. See where this leaves him in The Flash Untouchable.

We left the last episode with Barry telling Wally a frightening bit of information regarding his role in saving the future.

Knowing that Kid Flash needs to get a faster, the two speedsters have agreed to a race. This way Cisco back at STAR Labs can monitor both speedsters’ speeds, and see where they can improve. It is quite a display, though you can see where the veteran has a leg up on the rookie runner.

As usual, there is a mysterious body found in the city, and it will take the help of the STAR Lab equipment to determine what is going on. Iris notices that the name of the restaurant coincides with some of the notes regarding the Savitar vision.

Caitlin and Julian are working on an autopsy, while the gang looks on, and discusses Wally’s training. There is one small snag in the autopsy plan however, and that has to do with the victim’s meta-related killing. Witnessing a simple exchange in a back alley shows us a vital detail of how these victims are being attacked, and it’s much simpler than you might expect.

Team Flash is all in the lab, working on Wally’s training. Cisco manages to find a piece of material that he claims is the strongest available. They want to teach Wally that wonderful part of his ability known as phasing.

While at the latest crime scene, Barry realizes that the victims are, or were, police officers in his flashpoint timeline. So who is taking these guys down, and why? Barry attempts to postpone Joe West’s plans of having coffee with his family and his girlfriends family at Jitters.

Caitlin and Julian’s autopsy on the disintegrating man seem to be going nowhere, when Caitlin notices a change of coloration, leading to more discoveries. Apparently, Julian (aka Dr. Alchemy) was responsible for the creation of this meta. 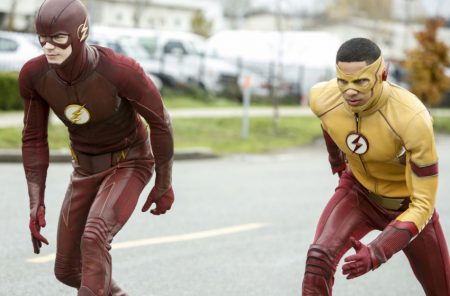 Chatting over coffee, we learn that Joe’s girlfriend’s daughter Joanie, has a crush on one Kid Flash, who is unknowingly across the table from her. The conversation regarding which speedster is the better hero becomes a bit awkward. Then, to break the ice, our latest bad guy shows up, calling out Joe West.

We watch as bullets cannot penetrate our criminal, just before Kid Flash appears to apprehend him. All the while, Barry remains on the balcony, giving Kid Flash cues as to how to proceed. A minor whirlwhind action is ablt to knock him off guard, as Kid Flash saves the day.

Back at the lab, the team is discussing how everyone made it through another ordeal without injury. Iris begins to break down, and decides to come clean with Joe about the Savitar vision. As of yet, Joe has been kept in the dark about the future vision ending in Iris’s death. As would be expected, Joe does not take the idea of his only daugther dying, easily.

Julian blames himself for Yorkin’s transition into a meta. Caitlin disagrees with his views. If that isn’t bad enough, Yorkin finds himself at the door of Barry and Iris’ loft. Yorkin has decided that the best way to make Joe suffer, is to take away Iris. This unexpected change in the timeline leaves Kid Flash with a terrifying decision: Yorkin or Iris.

Back at the lab, the team realizes that Caitlin’s power of cold may be the only way to slow down Iris’s condition while they try to find a cure. Caitlin does not believe she will be able, though the team back her up. Caitlin is able to control Iris’s deterioration for a time. Wally and Barry have a heart to heart about what happened, and Cisco shows up claiming they have a ‘crazy’ plan.

Based on theories of Quantum Mechanix involving the existence of Flashpoint in other universes, Cisco is going to try and vibe Flashpoint, to learn more about Yorkin’s targets, and devise a way to stop him. Julian discovers how Iris’s blood is attacking her, and that Barry’s blood may be the key to stopping Yorkin.
Caitlin’s cold fix was only temporary, as the infection spreads and she begins to lose control to Killer Frost.

It took Julian’s words to help enrage Caitlin into Killer Frost, and it was his words that helped her to remember who she was and who she was working with, to bring Caitlin back. Caitlin is able to get things back under control, and allow Iris to rest peacefully for a while.

Joe is on a train with Yorkin’s last victim, while Yorkin is busy taking out a bridge above the train tracks. With little time and fewer options, Barry decides he must phase the entire train in order to clear the wreckage. Wally can only stand and watch in awe, as he has been unable to achieve this milestone yet.

Barry is wiped out, the passengers are safe, and Yorkin returns. However Barry clues Wally into the fact that the speedster blood has something to do with negating his abilities. Seeing Barry tackle such a phasing task as the train, gave Wally the courage to tackle something he had yet been able to do. Wally manages to phase through Clive Yorkin, rendering his meta powers inert.

Julian was able to generate a cure for Iris from Yorkin’s DNA, and she is completely on the mend. Now that Wally is learning to overcome his lack of experience in learning new skills and Joe is in on what everyone is fighting for, it sounds like big things are in store for Team Flash.

While closing out the episode, Wally was in the lab experimenting with his phasing again. Proving to himself that this was not just a one-time fluke, when a portal opens up. Jesse Quick emerges, and she needs help: Gorilla Grodd is back, and he has Jesse’s father hostage in Gorilla City.

It took some doing, but it is great to see Kid Flash begin to grow into his abilities. I know a little about the destiny of Kid Flash from the comics, and he is beginning to fall in line, bit by bit. I hated seeing everyone keep Joe out of the loop as to what they were fighting, so happy to see them all on the same side. While Julian is the newest guy in the fold, he can be a bit abrasive at times. Even HR is starting to bring his own good ideas to the team. We have the makings of a great ensemble. Where will CW lead us now?

A fan of media on multiple platforms, I am always watching or playing something! Who knows what I will be on to next?
@mackeyp42
Previous Dead Inside #3 (comic) Review
Next ‘R’ rated Castlevania animated series staking Netflix soon