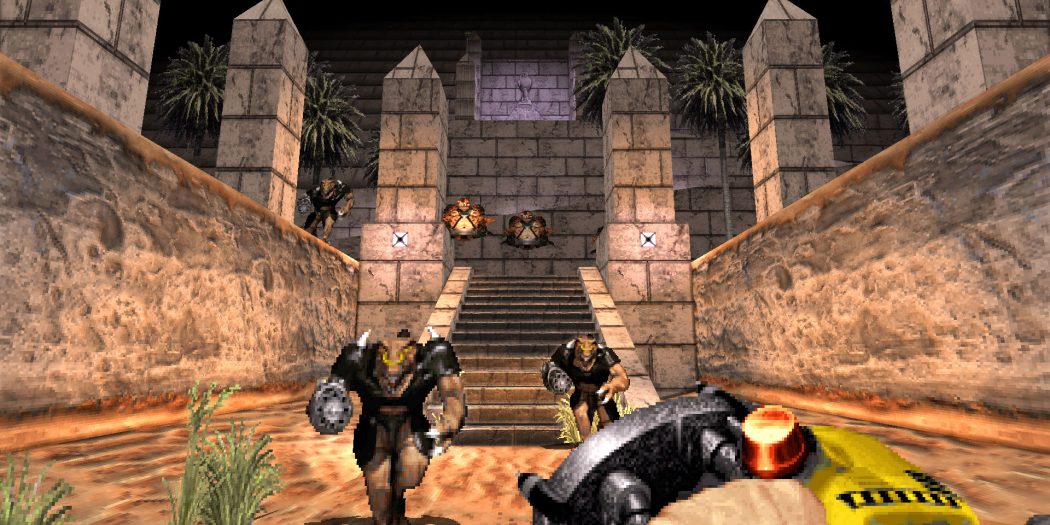 No it’s not a new Duke Nukem game, but a re-deco’d version of the groundbreaking Duke 3D is coming. And it’s packing some new content in tow.

Hurting for a new Duke adventure? Well maybe Gearbox’ latest announcement will soften the blow a little that there isn’t much on the horizon. Duke Nukem 3D: 20th Anniversary Edition World Tour is officially on the way. And it’s a little more than just a sharpened-up reprint of the original shooter masterpiece.

“When I first moved out to Texas to join the Duke Nukem 3D development team in the mid-nineties, I could not possibly predict that we were all going to be part of the emergence of the 3D First Person videogame genre that would ultimately impact the entire videogame industry,” said Randy Pitchford, President of Gearbox Software. “Making it possible for Allen, Richard, Lee and Jon to all come back together 20 years later to bring a whole new episode to the classic game is just one of those rare and incredible things that I hope will bring joy and happiness to hardcore videogame fans new and old.”

You read that right, the 20th Anniversary Edition of Duke will include an all-new episode. And yes, it’s cast in the classic engine, so it’ll fit right in with the rest of the game. It’ll basically be like firing up the King’s adventure on your 386 back in ’96 all over again. Just with content that you didn’t have back then… so it’s an expansion pack really.

Honestly -yes- I’d like a new Duke Nukem game with a new engine and all the trimmings. But really, I’d probably take a direct sequel to this bad boy, complete with that same old tried and true look. I mean, it’s got a certain charm to it, doesn’t it? And there doesn’t seem to be any kind of movement on another Duke title after the disastrous DNF landed with such a massive thud. A retro-FPS just might fit the bill quite nicely. At least we get something like that here, with eight new levels.

And you won’t have to wait long to dig in either. Duke Nukem 3D: 20th Anniversary Edition World Tour hits the PC (via Steam), PS4, and Xbox One on October 11th for the price of $19.99 USD.

Jason's been knee deep in videogames since he was but a lad. Cutting his teeth on the pixely glory that was the Atari 2600, he's been hack'n'slashing and shoot'em'uping ever since. Mainly an FPS and action guy, Jason enjoys the occasional well crafted title from every genre.
@jason_tas
Previous Batman: Return to Arkham finally gets a release date
Next Toys R Us announces Star Wars plans for Rogue One