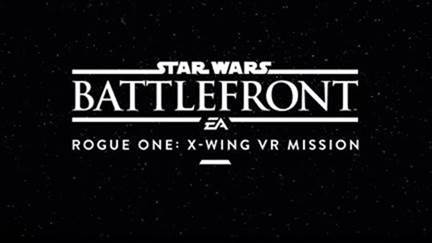 We’ve known it’s been in the works for a while now, but we finally have some details on Star Wars Battlefront’s VR mission.

James Svensson is a producer at Criterion Games, and is working on the PSVR mission for last year’s Star Wars Battlefront. He spoke on the subject recently and gave away a few details that fans are sure to want to read through.

For starters, I had no idea that this was to be a Rogue One tie-in. But it sure as hell is, with the official title being ‘Star Wars Battlefront Rogue One: X-wing VR Mission’. Not a name that rolls off the tongue really.

Space is the place

Name aside though, the mission is sounding pretty great. Svensson says that you’ll be facing off against an Imperial Star Destroyer, with “a belly full of TIE Fighters”. So, much like the Death Star mission that is coming up for the regular version of the game, the virtual reality mission will be set in the inky blackness of space.

Also much like the Death Star mission, there’s gonna be plenty going on. You’ll be surrounded by TIEs as you fight to complete a “complete a critical mission for the Rebellion”. Imagine being swarmed by Imperial fighters -from all sides- in VR, and having to blast your way through. That’s a proposition I think any Star Wars fan would find hard to pass up.

Even better, the mission will be free of charge. As long as you have a PS4 copy of Star Wars Battlefront and a PSVR helmet, this one’s gratis. How’s that for awesome?

Want to read more on the Star Wars Battlefront Rogue One: X-wing VR Mission? Click here and read through the full interview.

Jason's been knee deep in videogames since he was but a lad. Cutting his teeth on the pixely glory that was the Atari 2600, he's been hack'n'slashing and shoot'em'uping ever since. Mainly an FPS and action guy, Jason enjoys the occasional well crafted title from every genre.
@jason_tas
Previous August 24th Valiant Previews: Gen Zero, Faith, Rai, Valiant Handbook
Next Xbox VR might be exclusive to Scorpio