CliffyB’s shooter is in alpha, and it’s off to a strong start

Cliff Bleszinski is most famous for his work on the Gears of War series, but he has recently struck out on his own. His first independent IP since then is the multiplayer shooter LawBreakers. A hectic game where bullets, rockets and bodies fill the air as a battle is fought for the streets. Currently in alpha, CliffyB has given us a first hand experience on how his game plays and feels. If this is what the game looks like in alpha, I have to say, I’m impressed.

Like most multiplayer games, there is a story to LawBreakers but it doesn’t matter very much. There was an event called the Shattering where the moon broke apart and changes the world. Gravity was affected most heavily, being lesser in some areas, and allowing for superhuman abilities. Psychopaths and criminals unified all over the world with these new abilities, and law enforcement and vigilantes unified to counter them. All of this is only flavor text, the two sides even use characters that look different but feel the same. 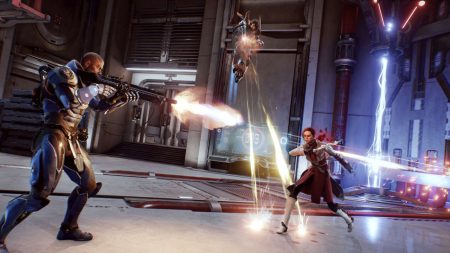 The look of the game is rather well done. The arenas are fairly colorful with interesting designs. For example, the strong point on one of the maps is the inside of a giant globe. Each of the characters also has a unique look and size, allowing them to be identified at a glance. While some of this comes down to each character having a distinct color, it works well. There’s a slightly humorously dark tone to the game as well, as when the player dies there is an emoji with xs for eyes. It’s a small touch, but it does its part to make the game feel unique.

The gameplay is the core of the game as a result. There is only one mode available right now, territory control, although there is a unique spin on it. Every round starts half a minute after the previous round, with three areas to take. Once that area has been taken by a team, it cannot be lost, and the round ends when all areas ave been captured. Capturing an area earns a team a point, and the game ends when one team earns thirteen points. It isn’t a very radical concept, but the slightly different approach keeps it interesting.

The gunplay is a bit of a departure from the usual FPS arsenal. Every class, of which there are four, has unique sets guns, grenades, movement abilities, and powerful moves scattered among them. It’s a little hard to label them with any pre-existing archetypes. What do you call a woman with a machine-gun, frag grenades, rocket boosters and ground pound? Or a man with a rocket launcher, a lightning gun, gravity grenades and a super mode where he shoots lightning out of his hands?

The gameplay is fast paced and very enjoyable. All of the characters have some limited way of increased mobility, with the most enjoyable being the grappling hooks that the melee classes get. The guns are all satisfying to use and no one class feels too overpowered, although some do seem favored. Each class has a different approach, whether it be rocket launchers, swords or machine-guns, keeping players on their toes as they are forced to adapt.

There is a vertical element to the game, with there being multiple floors in the buildings and easily mobility. The result is that many times during a match, you will have to fight someone above or below you. The game does a good job breaking away from typical firefights as a result. 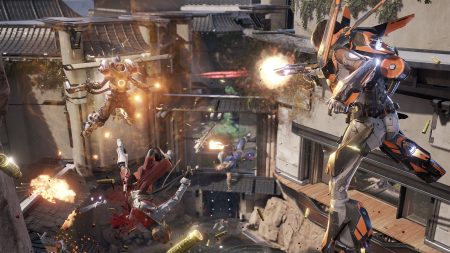 The vertical elements becomes even more pronounced and enjoyable around the control points. As mentioned before, gravity is weaker in some places on Earth now, and that includes control points. In those areas, the game feels like it takes place on the moon, with characters able to jump up to the ceiling and coming down slowly. The result is a three dimensional shoot and stab out, which is a chaotic mess. In all the right ways.

The alpha nature of the game does rear its head from time to time. One class has a lock-on rocket launcher that is very difficult to use properly. Either the instructions for it need to be clarified or it needs a smoother trigger. What’s more, it’s implied that there are characters and game modes that have not yet been added. It would be in the game’s best interest to add those, along with a few more maps.

If there’s one problem I see LawBreakers having, its carving out its own place in today’s market. The game has its charms, but it could use a few more to stand out. The gravity motif is one with endless possibilities and a few more aspects exploiting it would truly help the game come into its own. 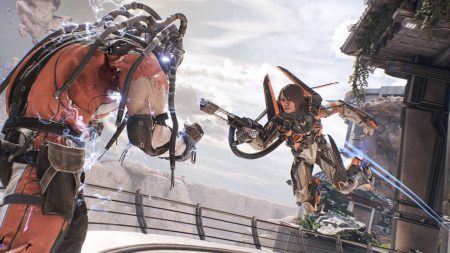 The biggest problem is that the game didn’t pick the best time to come out. A massive tidal wave of multiplayer games have come out recently, everything from shooters to survival horror. LawBreakers is nowhere near being a bad game, but it’s going to have to pull out all the stops in order to make its mark. Though I think it has the potential to do just that.

All in all, LawBreakers is a fun, chaotic game that is slightly hampered by limited options. There is the chance of it being lost in the sea of multiplayer games, though a few more unique aspects could stop that from happening. It is very much worth keeping an eye on. Here’s hoping it takes a good foundation and builds something amazing out of it.

LawBreakers will be released on PC sometime this year.