Not deep, but a heck of a lot of fun 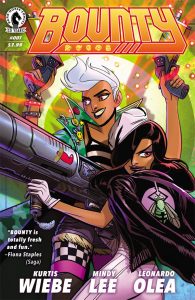 Bounty #1 is another new IP from Darkhorse Comics, and it has proven to be even more colorful than Cryptocracy, literally and figuratively. It centers around two sisters, and their ragtag criminal crew, trying to make a living in the underground of the early 23rd century. Their first issue introduces us to them, shows us a couple of days in their life, and gives us a peek at their wild world.

The sisters are heavily wanted anti-corporation criminals, with a bounty of ten-million. Circumstances at the beginning of the issue force them to take up low level bounty hunting while living on the edge of poverty. They prove to not be the best at this, as all their shown jobs end with no paychecks. One because of a canceled bounty and the other because of the target dying. The canceled bounty, however, is hinted to be leading to something far more sinister, which is kept deliberately vague.

The characters are not particularly deep, we only learn much about the sisters in fact, but they are enjoyable. The sisters are given contrasting personalities, one more easy going and the other a bit more uptight. Despite their attitudes conflicting at times, they are shown to deeply care for each other. One breaks out of heavy chains at the sight of a guard hurting the other. They’re not Shakespeare characters, but they’re enjoyable and likable. The other characters the reader knows little about, yet at the same time the little we see is enough to make the reader want to learn more. 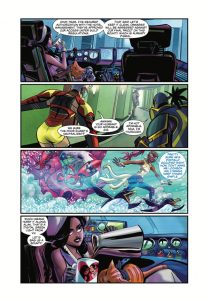 The comic, despite featuring terrorists, murder, and other such unpleasantness, is treated as a light-hearted romp. While one of the sisters constantly shows frustration at the set-backs, nothing too bad is shown as a result. The other simply keeps smiling and dropping wise-cracks. This creates a unique scenario. The reader wants the sisters to succeed, but aren’t too disheartened when they fail.

The art goes a long way to emphasize just how insane this world is. People go into combat wearing brightly colored armor, complete with goofy superhero names. Corporate goons are ridiculously large, with arms that look a little too small for their torso. Colors from all corners of the rainbow are included, even on a scummy, rear end of the galaxy space station. It works perfectly with the story and is an absolute joy.

The comic doesn’t explain some things that well though. A major plot point in the beginning is that the sisters have to wipe their entire database to keep it from being leaked. This is treated as them having to start over from square one. However, it is flat out stated that the large bounty on their head would not disappear because of this. There is a popularity contest angle to the underworld, fame measuring success, so it’s not clear how they’re set back. 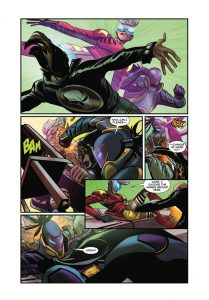 There are a handful of other moments where the comic dives in head first and explains matters later. We are introduced to a character diving into a fishbowl with a mermaid and sentient fish. She then proceeds to battle them, with a comically oversized submarine being used against her. Only after do we learn that the character was hacking a database via virtual reality.

In fact, overall the story is a little on the light side. There is a bit of world and character building, but not much of an overall plot. There’s hints towards one at the end, but it leaves the reader with more questions than answers.

Despite the comic being rather confusing at first, it does grab the reader’s attention. The story is not particularly deep. There are no overarching themes, deep character studies or moral dramas, but it is quite fun. Watching the sisters and their friends get into absurd scenarios in a crazy world is all that is needed to make this comic worth reading.

Bounty #1 is due for release on July 6th

At the end of the day, it's a fun read that leaves you asking questions, though sometimes not in good ways.

A recent college graduate and life long gamer, David is now working as a freelance journalist.
Previous PS4 owners can start up Paragon for free next month
Next Happy 20th Birthday Nintendo 64