Mirror’s Edge Catalyst offers fast paced and exciting game play, a boring narrative and an interesting open world for the protagonist, Faith, to navigate. For fans of the original Mirror’s Edge released in 2008, the experience will no doubt be disappointing when confronted with a multitude of bland and forgettable characters in conjunction with an incoherent and yet predictable storyline that will most likely render even the strongest players catatonic after a few hours; however, where the game lacks imagination or charisma, it makes up for with sensational parkour mechanics so exhilarating, that one could traverse Faith’s home, the City of Glass, for hours aimlessly without tiring of the satisfaction felt when the player can eloquently string together a series of flawless moves, free-running upon and across the rooftops of an expansive setting.

The open world environment introduced in Mirror’s Edge Catalyst gives players the opportunity to experiment and deviate from the set path far more than its linear predecessor, since the player can enjoy endlessly traversing the urban landscape without being funnelled down the narrow corridors of different levels simply to complete a mission or time trial. The newfound freedom the player has been granted serves as ideal for a game which condemns the restrictions enforced by a totalitarian government and by allowing such breathing 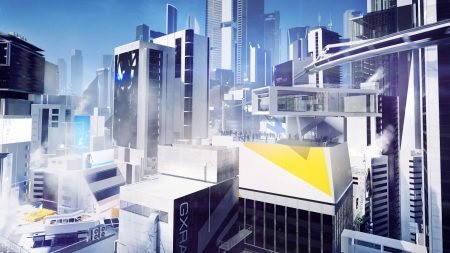 room, that sense of rebellious liberty which characterises so much of the series, extends to the player who will find themselves immersed almost immediately.

The City of Glass reproduces the sterile and obsessively sanitary prison of the first game, only with the increased scale and imposing skyscrapers, heightening the subtle incarceration so prominent throughout the game; the blindingly white buildings and the windows sparkling against the sun, contrasting to great effect, the beauty of the city with what its domineering presence implies; furthermore, the introduction of a day and night cycle as well as granting the player access to particular areas based upon their progress dynamically refreshes the game and prevents any monotony from developing. The setting of Mirror’s Edge Catalyst encapsulates everything that defined the memorable elements of the original title.

Perhaps the best aspect to the game, and the series in general, the parkour is fluid and responsive and an improvement upon its precursor although the player may initially feel that Faith’s movement is somewhat strange as she seemingly glides across the surface and that the mechanics are too simplistic. Nonetheless, by not overcomplicating the controls Faith can negotiate more awkward angles and enclosed vicinities with greater ease and thus not impede her momentum at crucial moments. The larger array of moves Faith can pull off which include grappling from one building the next and wall running from one wall to another serves as further evidence of Faith’s increased manoeuvrability, facilitating consistent augmentations with which to entertain the player and reduce the repetitive nature of such a game.

,The creation of a progression system in which points can be spent to improve Faith’s abilities in her gear, combat and movement is unnecessary and appears to act as a weak reflection of current convention in games. The upgrades themselves are facile and exist merely to emphasise the supposed improvement of combat in Mirror’s Edge Catalyst. 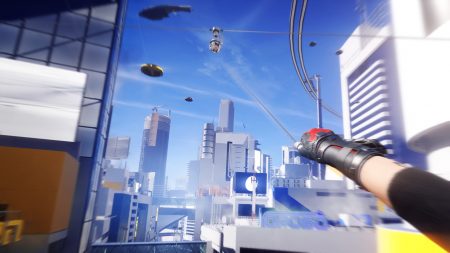 The combat itself is stronger when Faith is moving and can perform takedowns which do not interrupt the player’s flow and evoke a satisfaction upon impact with the opponent; however, when Faith is faced with multiple enemies the AI seems incapable of behaving intelligently, often resulting in laughable sequences where Faith can easily beat up four, or even seven armed enemies simultaneously while the AI mill around bemusedly, falling like armoured dominoes. What is unfortunate about the combat is how prominently the player will encounter frustratingly pathetic AI who will either not respond properly to the player’s attacks or, if higher level, will be resistant to all but one type of attack and will likely necessitate a continuous barrage of the same attack pattern to eventually defeat them.

The game provides the player with a number of varying side missions to complete alongside the campaign which mostly involve running from point A to point B before the timer runs out, with most of these side missions containing little relevance to the focal point of the narrative, consequently suffering from a similar problem to many contemporary titles which prefer to stress the quantity of available assignments to their quality. Nonetheless, they are challenging enough to induce tension when playing them and since they award the player with progression points or divulge more obscure information about the world and its characters, they at least serve a purpose and are not completely redundant.

The narrative of Mirror’s Edge Catalyst is not worth mentioning in substantial detail because it is unremarkable and dull. The constant use of esoteric jargon exclusive to the setting of the game does little to inspire an interest from the player in cut scenes that have replaced the original animations and often suffer from frame rate issues and atrocious lip syncing. The rebooted plot behaves in such a formless manner that the player will lose curiosity within the first couple of hours and with a large but indistinguishable cast, the narrative’s tedium will soon become apparent to both fans of the previous game and those new to the series.

The Frostbite 3 technology provides an adequate experience as draw distances and frame rates throughout the game world are reasonable on both consoles and PC maintaining somewhere close to 60 fps for the majority of the game although, loading times themselves can be wearisome. What is presented regarding graphics is not revolutionary or seamless with occasionally missing textures which subsequently pop in occurring frequently but overall performance is smooth. 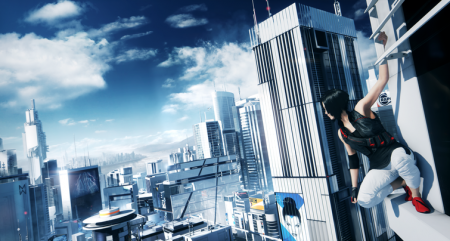 Mirror’s Edge Catalyst is certainly not a masterpiece and if DICE intend a sequel then elements ranging from the narrative to its combat mechanics need to be improved. The game shows promise with a solid free-running mechanic and an immersive atmosphere enhanced from the original Mirror’s Edge, and providing this series is not eclipsed yet again by more popular franchises, then hopefully a refined sequel can ameliorate this mediocre experience.

If you're looking for a game to play rather than watch where you can pretend to know parkour then this is a good one for Mirror's Edge fans and those new to the series. If however, you want something more meaningful from the narrative or just want to hear Lisa Miskovsky's Stay Alive one last time, then you will be disappointed.

I am a writer and reviewer who is very passionate about video games of all genres from the RTS to the RPG and very willing to talk about them excessively. Other than that I spend my time writing creative pieces and critical essays for academic fields or browsing crunchyroll for new anime.
Previous Cult Classic Fahrenheit: Indigo Prophecy returns on PS4
Next Bethesda facing technical difficulties with Fallout 4 mods on PS4