One low price scores you a ton of books to read, month-in, month-out on comiXology. 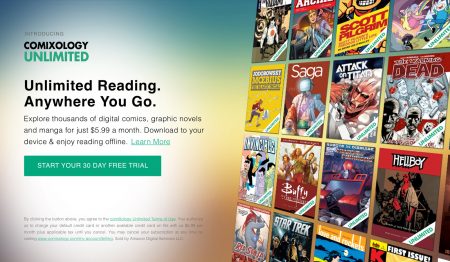 “We’re in a new golden age of storytelling with more incredible comics, graphic novels and manga than ever before,” said comiXology’s CEO and Co-Founder David Steinberger. “ComiXology Unlimited is fantastic portal to tons of great comics at a ridiculously great price. Get in there and start exploring.”

Already one of the premier digital comic book platforms out there, Amazon’s (you didn’t forget they bought them, did you?) comiXology is a favorite of ours here at BG. And as great as it already was, it just got better to the tune of ‘all-you-can-read’.

For the low price of $5.99 USD per month, the new plan offered by the company will let you unlimited access to books from a bunch of the biggest publishers out there today.  While the big two are excluded from the list, you’ll find some incredible stuff nonetheless.

Included in the deal are books from “IDW Publishing, BOOM! Studios, Dynamite Entertainment, Kodansha Comics, Oni Press, Valiant Entertainment, Archie Comics, Fantagraphics Books, Humanoids, Action Lab Entertainment, Aspen Comics, Zenescope Entertainment and more”. Honestly, this is probably worth it for Valiant and IDW alone, and if you can’t find some goodies in there somewhere, then you’re doing it wrong.

Here’s a few of the best bets, straight from the press release (current faves of mine are highlighted):

Yep, that;s some good stuff right there. And it’s all yours for the aforementioned $5.99 USD a month. The service is active starting today, and you can also score a free month just to check it out if you prefer. Click here for all the info or to sign up.

Jason's been knee deep in videogames since he was but a lad. Cutting his teeth on the pixely glory that was the Atari 2600, he's been hack'n'slashing and shoot'em'uping ever since. Mainly an FPS and action guy, Jason enjoys the occasional well crafted title from every genre.
@jason_tas
Previous Marvel to adapt The Force Awakens next month
Next TMNT: Mutants in Manhattan rocks launch trailer