Fans of Marvel’s current cartoon universe are in for a treat with wave 2 in stores and a wave’2.5′ on the way. 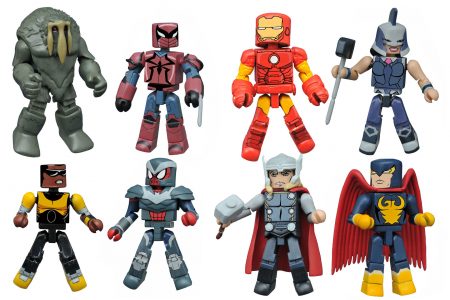 Taken from across Marvel’s modern slate of animated shows (on Disney XD), the diverse wave of characters that you see above are set to become available in Walgreen’s stores this Summer sometime. Also as you can see, four brand-new characters, never seen in plastic before, are included in with this freshly announced wave 2.5.

While you can grab the above two-packs this Summer, we did say that there’s a series hitting as we speak. In your local Walgreens either now or very soon (they started shipping) are “Gamora and Drax from Marvel’s Guardians of the Galaxy; Iron Spider and Taskmaster from Marvel’s Ultimate Spider-Man; and Black Widow, Thanos, Dark Thor and Dark Iron Man from Marvel’s Avengers Assemble”.

Each set mentioned will be sold in the usual two-pack fashion too, so keep that in mind as you plan out your purchases. One of the things I like most about Minimates is the twofer style of packaging. It’s pretty easy to build up a sizable (and cool-looking) collection in no time, and not spend a ton of dough doing it.

Jason's been knee deep in videogames since he was but a lad. Cutting his teeth on the pixely glory that was the Atari 2600, he's been hack'n'slashing and shoot'em'uping ever since. Mainly an FPS and action guy, Jason enjoys the occasional well crafted title from every genre.
@jason_tas
Previous In Between coming soon to Xbox One
Next There’s no TV show (yet), but Frank is definitely back in Punisher #1