Our long-awated Street Fighter V review is finally here. Will fists fly at this location?

I have been sitting on this one since Street Fighter V launched last month. When the game launched, I was excited to get into some online matches and test my skills against other fighters from around the world; simply put though, the servers were a mess. Over time, the servers cleared up, but sadly those server issues aren’t the only thing plaguing SFV. As such, this review is being conducted as if the servers never experienced any problems.

Story has never been a strong concern for Street Fighter as a franchise, and that doesn’t change with the most recent iteration. Each character has a brief story mode, consisting of two to four fights, with small comic book style cut scenes in between.

These fights are incredibly easy, and while it is nice to have a little bit of background without having to do any outside research, I can’t help but feel that the totally missing arcade mode would be better than these sorry excuses for narrative. It should be noted however, that a story update (fleshing out the characters stories to make them longer) is coming later this year. 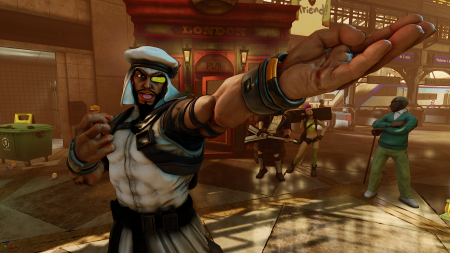 Because the “story” is such a small piece of the game, I am going to use the rest of this section to talk about the various modes SFV has to offer. The closest thing to an arcade mode that the game has is the survival mode.

Here players battle through either 10, 30, 50, or 100 enemies, using points they earn in game to buy health and other upgrades. This would be an excusable alternative to the arcade mode if this was not the only way to obtain new colors for characters.

The mode is fatally flawed too, by the ridiculous in-match difficulty curve that is employed to create a sense of challenge. The first 95% of fights are like fighting a ragdoll, and then the difficulty jumps for some reason, making it feel as though you are fighting someone with actual experience and skill.

Training mode is what is to be expected for a modern fighting game. There’s some frame data and the ability to reset your position in order to drill home combos and maneuvers. The dummy has all manner of styles including standing still, jumping, and punching, among others. It must be included that there is no real pure-training mode, although it is promised to launch later this month.

The online modes function as they are expected. I very rarely experienced lag, making for an altogether enjoyable experience. My one gripe about online mode selection is the fact that battle lounges only accommodate two people at this point, meaning that more than two people can’t get together to spar at any point. This, again, is promised to be fixed by addition in the future. 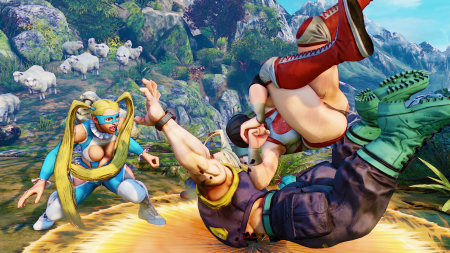 One of the most important aspects in a fighting game is control. And happily, ike every other Street Fighter I have ever played, the gameplay here is very tight. There are two main methods of control, and you can employ either the standard Dualshock 4, or an arcade fight stick.

I used both methods, and the dualshock offers a tight control scheme. I prefer the fight stick for the majority of my play though, and that is what I used for the majority of my time playing the game for review. Street Fighter V offers legacy controller support for fightsticks as well, and seems to support any type of PS3 compatible stick.

In terms of input, I had no problems. The game reacted how I expected it to and I never had an issue getting my character to do what I intended him (Birdie, mainly) to do. Game specific mechanics, such as the v-trigger and specials were easy to pull off, and would be simple to use for someone who is a newcomer to the Street Fighter Franchise. 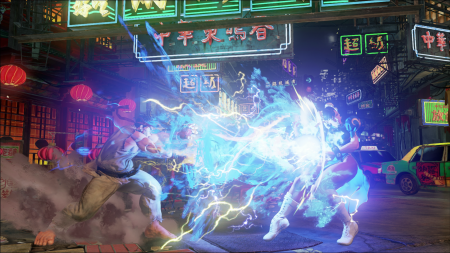 Street Fighter V is the most polished game in the series in terms of auditory and graphical presentation. The graphics are crisp and each character stands out from the environment. I never experienced any confusion about where my character stood or what they were capable of from where they were standing.

The stages are varied and unique as well… if few in number. The stages each represent a highly different environment, and there is a different stage to meet everyone’s preferences. In all, the backgrounds are gorgeous and are interesting locales to do combat in.

The sound design is very strong in Street Fighter V too. The character themes are strong and distinct, and sound effects in fights all make sense to the ear. The sound effects add to the overall experience quite a bit actually.

Street Fighter V is a strong entrant in the series, however, the apparently missing and/or neutered modes keep the game from being what it could have been. The promise of things like a shop for cosmetic items and a full story mode are only that at this point- promises.

When these modes launch, maybe it will be a different story. As of right now, SFV is merely a neutered fighter with strong core mechanics.

Erich was introduced to gaming by his grandfather before he could walk. Since then, he has grown up loving Nintendo and most games in general. He couples his love of videogames with journalism to cover news, provide reviews and tell it how it is in the gaming world.
Previous Easter Greetings from the Hatchlings!
Next Brutal Roundup: 3/7 through 3/13