If you don’t purchase the Founder’s Pack, you’ll still have a chance to try the Open Beta for free this summer. 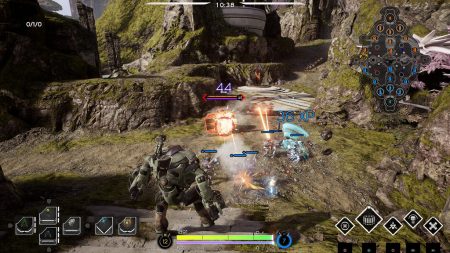 The Playstation Blog has announced the release date and pricing structures for Epic Games’ new console friendly MOBA (mobile online battle arena, for those who walk the waking world with their eyes closed) (and by console, we mean Playstation 4).

The $19.99 Founder’s Pack will net purchasers access to the game’s Early Access form, as well as skins, boosts, and “other cosmetic items.”  Purchasable on March 14th, the Early Access opens to Founders on March 18th.

Challenger Packs ($59.99) and Master Packs ($99.99) are also available, though it’s unclear yet how exactly they will differ from each other.  The suggestion is they’ll include “a huge number of skins, unlockable items, boosts, a unique skin, and a Founder’s Pack to give to a friend.”

During the game’s “Early Access Season,” new Heroes will be available for free every three weeks, and Paragon will hold community events, as well as provide rewards on a daily and weekly basis.

Epic Games has promised that the game “will never be pay-to-win,” so the only purchasable items (beyond Early Access) will be cosmetic or convenience based (not unlike games like League of Legends).

I’m pretty excited for a proper MOBA on my Playstation 4, especially one that uses verticality and 3rd person action in the way Paragon does.  It helps that $19.99 is an easy access point (as is free, come Summer).  Expect hands-on impressions in the future.

As before, you can still sign up on Paragon.com for a chance to play the game on free beta weekends.

Brutal Gamer's Nintendo Editor began his gaming life a little late- at five years old. But he's made up for it in the two decades since, gaming and writing about gaming with the same passion, fervor, and unrelenting love as his five-year old self.
Previous No booth for Activision at 2016’s E3
Next Nintendo Download March 3rd