In the same vein as the excellent Ghostbusters board game that hit recently, IDW Games has a Teenage Mutant Ninja Turtles title in the works that you’ll want to have a peek at. 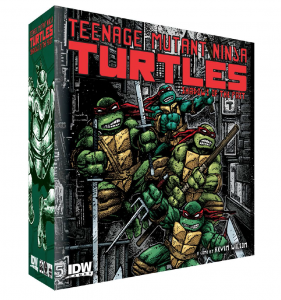 “Kickstarter seems like an incredibly fun way to show the game to the fans,” said Teenage Mutant Ninja Turtles co-creator, Kevin Eastman. “It’s almost like having a month long convention celebrating all things Teenage Mutant Ninja Turtles. We’ll be able to show off all kinds of aspects of this awesome game and the IDW comic universe it comes from. There’s so much to be really excited for, but I’ll save some of the fun for when the campaign’s actually live!”

‘Excited’ is probably a great word for this one, as the new TMNT board game looks about as great as you could possibly hope. Based on the current Turtles comic published by IDW’s comics wing, the game stars the fab four in a battle against the villainous Shredder and his Foot Clan of ninjas.

There are more characters in there too from the books, like Alopex, Karai, and of course April O’Neil. April is actually the star of her own ‘hero pack’ add-on, as are all four Turtles. The difference between April and Turtles (besides the obvious) is that April is a Kickstarter exclusive. All backers will get access to this bonus, so that you’ll be able to play as Miss O’Neil and not just the four bros.

Each character has a cool miniature to represent him or her too, which is all kinds of cool, especially if you’re into painting your minis- though they look pretty cool unpainted as well. As another bonus for Kickstarter backers too, there’s a special four pack of the Turtles included with the ‘Works’ edition (which also has the coolest box ever) which reflect the original TMNT art from co-creator Kevin Eastman. Pretty awesome.

Click here to check out the game in all its glory and grab one for yourself. Just be quick about it, the lower-priced entry points seem to be selling out pretty freaking fast.

Jason's been knee deep in videogames since he was but a lad. Cutting his teeth on the pixely glory that was the Atari 2600, he's been hack'n'slashing and shoot'em'uping ever since. Mainly an FPS and action guy, Jason enjoys the occasional well crafted title from every genre.
@jason_tas
Previous ComiXology welcomes in comics mag Heavy Metal
Next It’s a century of zombies, all in one tidy little video courtesy of Dying Light