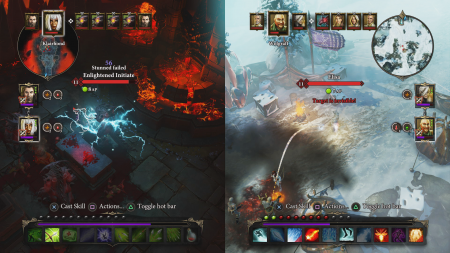 Divinity: Original Sin is, to spoil the surprise, a fantastic RPG, and the Enhanced Edition brings the experience, as well as fresh voice-acting and a myriad of additions, successfully to consoles.

I spent my entire time with Divinity playing co-operatively.  The entire game can be play in this manner, either locally or online, and if you have a friend with the patience for an RPG of this size and challenge, then I can’t recommend enough that you make the effort.

The side-quests are the true narrative joy of Divinity- while the main story is a well-written and enjoyable fantasy affair following Source Hunters trying to thwart the end of the world, it does not quite match the enjoyment of the little things.  Helping a tomcat hook up with an aristocratic lady feline, convincing a pair of men that a docile lady orc is safe enough to love, and crafting well-aged barley to weaken enemy orcs are entertaining and hugely enjoyable ways to pass the time (something you’ll be doing a lot of, as the distractions come at every turn).  The voice-acting adds to the hilarity of the situations, and while some lines are delivered underwhelming, that seems to only bolster the laughs, rather than deter from the experience.  To make matters even better, in co-op two players can simultaneously accomplish two quests.  So while one player helps that tomcat prove he’s worth his collar in gold, the other can attempt to free a talking, severed head from a lifetime of show business.  It speeds up the process and cuts the walking (or quick traveling- the checkpoints are abundant and generously placed) time in half, so you can spend more time invested in the oddball scenarios and less walking passed the same orc corpse that you’d slain an hour ago.

A hugely detailed quest log even helps you to keep track of the myriad of tasks ahead of (and behind) you, for whenever details are missed by one distracted player or another.  Unlike some RPG in-game synopsis, Divinity’s gives you all the information you need to find your footing again after some time away. 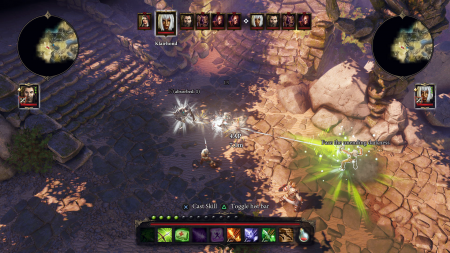 Every battle in Divinity is a puzzle, and we found ourselves restarting (by reloading- quick save often!) encounters simply to attempt it from another angle when a first turn didn’t go exactly to our standards.  We would literally walk to a different side of the enemies before initiating combat and reap the benefits- that’s how intelligent enemy placement, and control of their movements, is, no matter your difficulty.  Because of your mages’ elemental prowess (you’ll want at least one on your team- we ran with one warrior, one archer, and two mages), driving foes into small groups is instrumental in quick victories.  Naturally, grouping up your own party on a small space can instantly spell doom.

The joy of puzzle-solving in combat doesn’t come from just placement and approach.  Elements work together with each other and the environment to set up chain reactions that increase your combat effectiveness in a substantial way.  Soaking opponents with rain makes them easier to freeze, and water can put out fire that some infernal foes might use to heal.  Resulting puddles can similarly be used in conjunction with lightning spells, stunning every enemy standing therein.  Or those puddles can be frozen, knocking over foes (and allies) who try to cross. Of course, putting out fire also results in steam, which lingers and affects the battle in its own way.

Or you could turn piles of acid into explosives and advance by cover of resulting smoke.  The environment is littered with barrels filled with oils, acids, and water, allowing other classes to make use of these infinite choices to formulate a successful battle plan, even with no mage on deck.

Of course, these environmental obstacles can be used by enemies as well, and don’t simply pertain to the elements.  My partner and I were wiped after a particularly difficult boss fight some dozen hours in, and on our reset we jokingly decided to build a wall with the abundant vases strewn about the arena.  We did our best to block off passages without alerting the enemies to our presence, not once thinking our effort would pay off (at best, we figured it’d take our foes a turn to destroy it before advancing).

This wall of porcelain pottery worked miraculously: every single boss took the long way around, giving us plenty of time to set up elemental hazards and pick them off with powerful arrows.

So when you die (and you likely will, no matter your difficulty) (again, save often), don’t be afraid to try again.  Only this time, approach the battle in a completely different way.  You’ll be surprised to find what works. 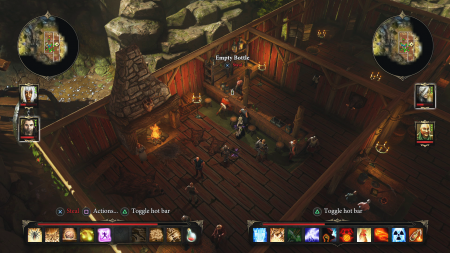 Playtime in Divinity advances in the sense of a traditional RPG: you complete quests, side-quests, and gather loot in your mission to grow stronger, access later areas, and repeat the cycle.  Grinding is not an effective strategy here, as a completed encounter doesn’t refresh, and your level-ups don’t have the speed of progression required for such a play loop.  The good news is, each level earned has a much farther-reaching affect than a couple of stat points.  However, when a combat scenario proves too tough, you can’t power-level to beat it.

But the game gives you the tools you need nonetheless- you only need apply your brain.

Divinity Original Sin: Enhanced Edition still bears a few technical oddities: some enemies flounder even after their turn seems to be over, causing you to wonder if something hasn’t frozen, and occasionally a turn will be skipped with no explanation.  Sound effects in battle will sometimes cut out, leaving you with nothing but the (very good) music.

It’s also too easy to accidentally steal something when you’re trying to speak with someone.  Because the actions are both contextually tied to the X button, you might be attempting to shop or continue a quest line when your intended target walks the barest fraction of an inch to the side, and all of a sudden you’re pinching their latest wares or prized possessions.  This often instigates combat you’re not necessarily interested in seeing to the end, once more requiring a reload.  So save often, even when you think you’re safe.

Maneuvering menus takes some getting used to, but the systems are all translated effectively to the console.  Once you have a handle on how it all works, you’ll be sending items to allies on the fly.  It’d be nice if it were a little easier to move items throughout your inventory (as it stands, it takes a few too many button presses- an issue offset by the several sorting options), but these are small complaints in the grand scheme of such an enormous and enticing RPG.

If you’re at all a fan of witty writing, traditional RPG loops, or co-operative gameplay, then waste no time in picking up Divinity: Original Sin’s Enhanced Edition.  If you’ve already played the title before, then you can enjoy the new features, such as split-screen co-op and controller support, with a free update on your PC.  Intelligent design and pleasing aesthetics combines to create a mesmerizing co-operative experience that is unmatched in the current generation of role-playing games.

*This review of Divinity: Original Sin was based upon a copy supplied to Brutal Gamer by Focus Home Interactive.

Brutal Gamer's Nintendo Editor began his gaming life a little late- at five years old. But he's made up for it in the two decades since, gaming and writing about gaming with the same passion, fervor, and unrelenting love as his five-year old self.
Previous Obi-Wan & Anakin book coming to Marvel’s Star Wars lineup
Next New Uncharted 4 Trailer Shows Branching Dialogue Options