Loaded for bear with special effects, Gods of Egypt pairs Nikolaj Coster-Waldau with Gerard Butler for some god vs god battling. 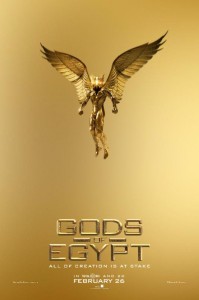 In this spectacular action-adventure inspired by the classic mythology of Egypt, the survival of mankind hangs in the balance as an unexpected mortal hero Bek [Brenton Thwaites] undertakes a thrilling journey to save the world and rescue his true love. In order to succeed, he must enlist the help of the powerful god Horus [Nikolaj Coster-Waldau] in an unlikely alliance against Set [Gerard Butler], the merciless god of darkness, who has usurped Egypt’s throne, plunging the once peaceful and prosperous empire into chaos and conflict. As their breathtaking battle against Set and his henchmen takes them into the afterlife and across the heavens, both god and mortal must pass tests of courage and sacrifice if they hope to prevail in the epic final confrontation.

This one was nowhere near my radar personally, but it does look kind of neat. Massively overblown visuals and cool designs aside, ancient Egypt is something that’s pretty much ignored across the boards when it comes to Hollywood blockbusters, so it’s cool to see it getting any play at all.

I like the idea too that the armor the gods wear is the form that pretty much everyone knows as their ‘true forms’. Though I have to admit I’m a little confused by the fact that Set’s armor set makes him into Anubis (the jackal), as opposed to his more familiar serpent form. Maybe there’s a reason for it that’s yet to be explained.

I’m also a little mixed up by Coster-Waldau and Butler playing the title Gods of Egypt since neither one looks all that much like, you know, and ancient Egyptian. Though maybe that’s handled in the film as well, so we’ll see.

You can check out the trailer in full right here; Gods of Egypt lands in theaters on February 26th, 2016.

Jason's been knee deep in videogames since he was but a lad. Cutting his teeth on the pixely glory that was the Atari 2600, he's been hack'n'slashing and shoot'em'uping ever since. Mainly an FPS and action guy, Jason enjoys the occasional well crafted title from every genre.
@jason_tas
Previous Nintendo loads up on Holiday deals for Black Friday
Next Zombi munching on retail shelves this January