Following up on the collected edition of the first ‘phase’ that hit a few years ago, a Collector’s Edition for the second round of Marvel’s Cinematic Universe is on the way in short order. 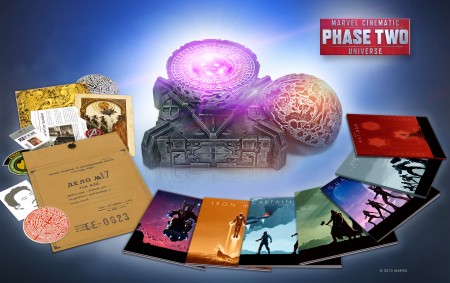 I don’t remember seeing that this was even announced, but as cool as it looks, I’m pretty pleasantly surprised. Maybe not actually announcing it ahead of time was a safety precaution though, as the original MCU box set was hit with delay after delay, before it finally made landfall at retail. And as much as I like that set, this one looks even better.

While the same internal packaging for the discs (re: movies) carries over to this new set, that’s about the only thing that’s the same. You’ll also get a bunch of physical goodies in the box, as well as Blu Ray 3D, standard Blu Ray, and digital versions of the movies. And then there’s that case, made to look like the Infinity Stone from Guardians of the Galaxy.

Marvel’s Ant-Man releasing on Blu-ray December 8th marks the end of MARVEL CINEMATIC UNIVERSE: PHASE TWO. Fans can now celebrate with this action-packed 13-disc collector’s set. The limited-edition, 13-Disc Marvel Cinematic Universe: Phase Two Collection invites you to hold the greatest power in the cosmos in your grasp – an orb containing one of the legendary Infinity Stones! Plus Blu-ray 3D™, Blu-ray™ and Digital Copies of all Phase 2 films, in collectible packaging designed by artist Matt Ferguson. This set overflows with stunning Marvel memorabilia, including a gold-foiled page from the book of Dark Elves, an ancient drawing from the Morag vault, Avengers and S.T.R.I.K.E. uniform patches, a replica of the Tony Stark tattoo from Iron Man 3 and much more!

Yes, that’s awesome, and yes – you want it. And you can get this limited edition set of the MCU Phase 2 films on December 8th. As to where you can get it, pre-ordering one from Amazon (right here) will get the job done. Amazon, by the way, looks like its the exclusive retailer for the collection, so if you do want one, they’re your option.

Here’s the specifics on the actual films in the set:

SYNOPSIS:                           The limited edition, 13-Disc Marvel Cinematic Universe: Phase Two Collection invites you to hold the greatest power in the cosmos in your grasp – an orb containing one of the legendary Infinity Stones! Plus Blu-ray 3D™, Blu-ray™ and Digital Copies of all Phase 2 films, in collectible packaging designed by artist Matt Ferguson. This set overflows with stunning Marvel memorabilia, including a gold-foiled page from the book of Dark Elves, an ancient drawing from the Morag vault, Avengers and S.T.R.I.K.E. uniform patches, a replica of the Tony Stark Tattoo from Marvel’s Iron Man 3, and much more!

Pre-order now, only at Amazon: http://amzn.to/1LJ9Rie

1:1 Prop Replica of the Orb

PLUS an Exclusive Bonus Content Disc with 166 minutes of  bonus material and more!

Journey back through Marvel’s Phase 2 films, from its launch in Iron Man 3 through its fulfillment in Ant-Man, to see how individual characters grow and change, how their relationships with each other evolve over time, and how the universe itself expands with each story. Listen to filmmakers discuss the first set of Phase 3 films– Marvel’s Captain America: Civil War, Marvel’s Doctor Strange, and Marvel’s Guardians of the Galaxy 2 – and discover there are no limits to the adventure!

Learn the story behind the post-credit sequence in Marvel’s Phase 1 and 2 movies, and explore how the scenes connect and unify the far-flung characters and worlds of the Marvel Cinematic Universe.

Marvel One-Shot: A Funny Thing Happened On The Way To Thor’s Hammer With Audio Commentary By Clark Gregg

Marvel One-Shot: All Hail The King With Audio Commentary By Drew Pearce And Ben Kingsley

Guardians of The Galaxy: Deleted Scenes

Guardians of The Galaxy: Preproduction Creative

Marvel Entertainment, LLC, a wholly owned subsidiary of The Walt Disney Company, is one of the world’s most prominent character-based entertainment companies, built on a proven library of more than 8,000 characters featured in a variety of media over seventy-five years.  Marvel utilizes its character franchises in entertainment, licensing and publishing.  For more information visit marvel.com.  © 2015 MARVEL

ABOUT THE WALT DISNEY STUDIOS:

For over 90 years, The Walt Disney Studios has been the foundation on which The Walt Disney Company was built. Today, the Studio brings quality movies, music and stage plays to consumers throughout the world. Feature films are released under the following banners: Disney, including Walt Disney Animation Studios and Pixar Animation Studios; Disneynature; Marvel Studios; Lucasfilm; and Touchstone Pictures, the banner under which live-action films from DreamWorks Studios are distributed. The Disney Music Group encompasses the Walt Disney Records and Hollywood Records labels, as well as Disney Music Publishing. The Disney Theatrical Group produces and licenses live events, including Disney on Broadway, Disney On Ice and Disney Live!.

Jason's been knee deep in videogames since he was but a lad. Cutting his teeth on the pixely glory that was the Atari 2600, he's been hack'n'slashing and shoot'em'uping ever since. Mainly an FPS and action guy, Jason enjoys the occasional well crafted title from every genre.
@jason_tas
Previous Puro Sound IEM500 (Headphones) Review
Next Sony cuts 1st party support for the PS Vita