Bloodbowl II feels like Bloodbowl, and in the board game videogame market, that is a very good thing.

Playing Blood Bowl II feels a lot like playing Blood Bowl does in fact. Players take turns trying to move the ball down the field and into their opponent’s endzone. Blood Bowl by the way, as in the ‘sport’, is itself a mix between football and the Warhammer tabletop war game. Teams of different races made up of different player types do bloody combat in the name of violent fun, most of which carries over well into the video game sequel that we’re looking at today.

There are a number of different modes within Bloodbowl II, including a campaign where the player takes the coaching position of a team that is on the verge of going extinct. Throughout the campaign there are various side stories, such as the question about what is going on with the former captain of the Reikland Reavers (the player’s team), and a gang of ogres.

The campaign of the game is also the tutorial of sorts. Through various games, the player learns every intricacy of gameplay, from recruiting staff members such as assistant coaches and cheerleaders, to recruiting new players. The plot isn’t the drawing point to Blood Bowl II, however. When booting up Blood Bowl II, I wasn’t looking for a great story, but a turn based, violent board game adaptation. I found all of that, and even received some unexpected comedy as well. 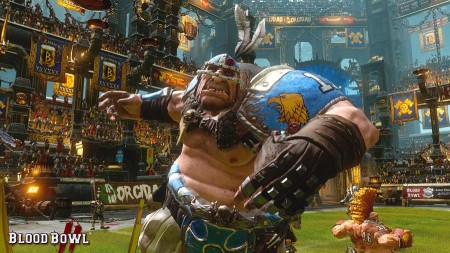 The narration of the game is done by two standard announcer types: Bob, an ogre, and Jim, a vampire. They offer witty commentary on the specific situations in the campaign mode, even making quips about “Wolf News,” and other real world references.

Aside from the humor, the game controls very well too. The left analog stick moves the cursor, while the right stick moves the entire screen. The face buttons do most of the rest of the work. The intuitive controls make it so that the player rarely needs to worry about what they are doing or if they are doing it correctly. Blood Bowl II is very careful to make sure players can’t break the rules.

The game plays very smoothly for the most part. Virtual re-rolls are apparent when they occur, and are important due to the dice-heavy nature of the game. The turn based and stat heavy nature make it apparent that things that should be simple, like picking up a ball or running a few extra feet, will fail very often. There is never a question of why, however. Stats are always visible for both teams, and outcomes of rolls make as much sense as can be expected by random numbers.

Everything from player models to player cards during confrontations are nice to look at. The text is sometimes small, but that is a nitpick that can be easily overlooked. 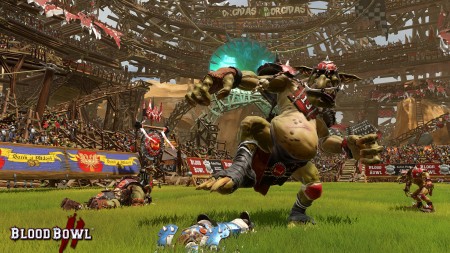 The sound that exists in game is nice to listen to, however there isn’t too much of it. There is main menu music, but most of the time players are listening to ambiance setting stadium music and horns. This isn’t a complaint, however. The noise adds to the atmosphere and makes it seem as though I am really at one of the Bloodbowl stadiums on a beautiful afternoon taking in some carnage.

The RNG wouldn’t be true RNG though, if it wasn’t infuriating at times. On one occasion during my time with the game, I nearly lost because my players continuously failed to simply pick up the ball.

There are a number of ways players can experience Bloodbowl II. Locally, there is the campaign mode that I mentioned, which offers an increasing difficulty for single player games, and a local versus mode where players take control of teams and duke it out. 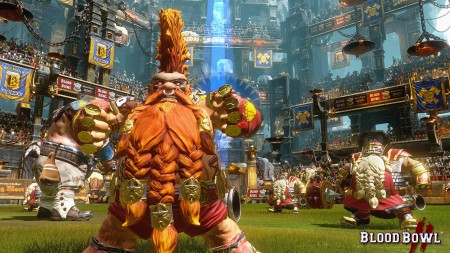 The game really shines in its online modes, however. Players have the ability to make a team and take it to an online hosted league to battle it out with other players who are all trying to do the same thing: win in the most brutal way possible. Players can upgrade teams and players to try to beat other players.

One qualm I noticed during my time with the game are load times. The load times sometimes go on for a very long time, while other times it goes quickly. The negativity of this statement is diverted because during that long load time, the entire match is loaded. Another annoying wait time though, is the time between turns. On some turns, the AI opponent took forever to move. This is negated in the multiplayer because of a turn timer, however.

Bloodbowl II is a faithful addition to the Bloodbowl family. It looks, sounds, and feels like a Bloodbowl game should.

The game plays very well and minimizes confusion that the player may feel at picking up a totally new, admittedly complicated, game. The many modes make sure that players will find something to suit them in the game, whether they like like to test their mettle against AI opponents, a close friend, or total strangers. Load times are a minor hindrance, but aren’t enough to take away from the experience.

Erich was introduced to gaming by his grandfather before he could walk. Since then, he has grown up loving Nintendo and most games in general. He couples his love of videogames with journalism to cover news, provide reviews and tell it how it is in the gaming world.
Previous Hideo Kojima has left Konami. Or he hasn’t. Or something.
Next Behold, the Black Knight returns to action in his new Marvel series