Yet another Mortal Kombat variant figure is set to hit as a part of Mezco Toyz’ excellent line, this one exclusive to the upcoming NY Con. 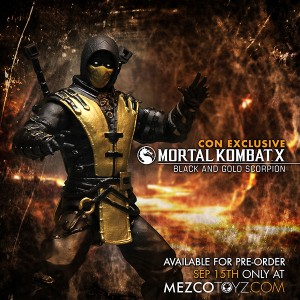 Oh how I love this line. There’ve been Mortal Kombat figures in the past of course, some of them pretty good, but none have had the level of detail, included accessories, or poseability that Mezco’s figures have. The line has been really greatly expanded with variants too thus far, and these aren’t your run of the mill ‘one-off’ versions that have nothing to do with anything either.

No, you won’t find ‘Deep Dive Raiden’ or anything like that here, but you will find alternate editions of the figures that have more game-accurate weapons and special-move flourishes included and some different paint schemes. Take this Scorpion for example.

While he’s got the same 6″ scale and 23 points of articulation that the regular version does, as well as  that version’s twin swords, spears, and an extra pair of hands, he’s sporting some new duds. The nifty black and gold paint scheme actually vastly improves on the original’s yellow and black in my opinion, and I love the spooky eyes- just kind of glowing there underneath his hood.

The figure went live on Mezco’s website a few days ago, but is still available for pre-ordering. And if you’d rather take your chances and grab this limited edition toy in person, you can do that at the Mezco Toyz booth on the show flor at the Javits Convention Center- they’ll be in stall #1754.

Jason's been knee deep in videogames since he was but a lad. Cutting his teeth on the pixely glory that was the Atari 2600, he's been hack'n'slashing and shoot'em'uping ever since. Mainly an FPS and action guy, Jason enjoys the occasional well crafted title from every genre.
@jason_tas
Previous Destiny: The Taken King smashes launch day records
Next GameStop cuts support for digital pack-ins in console bundles