Winter is coming for Lara Croft in The Frozen Omen 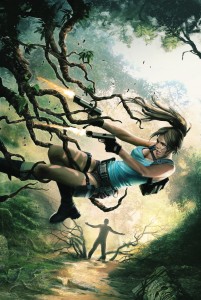 It’s up to Lara to stop a group of cultists from causing worldwide cataclysmic devastation, and ancient ivory artifacts hold the key to both salvation and destruction! It’s a race against time in Lara’s new quest, filled with incredible action, dual pistols, and high-spirited adventure.

With a brand new game on the horizon (for Xbox One gamers anyway), it’s going to be a big Fall for Tomb Raider fans. And it’ll be an even bigger one thanks to Lara Croft and the Frozen Omen.

Telling a tale that’s suitably epic, the comic comes from the mind of writer Corinna Bechko. You might know Bechko from her work on Star Wars, as well as projects from all the big publishers, including Marvel and DC. She’ll also be penning the upcoming Aliens/Vampirella crossover series, which should be a very interesting mashup indeed.

Here though, we see classic Lara- dual pistols, high adventure, and larger than life stakes. If you’re into adventure, action, and maybe even a little old time pulp, this might very well be right up your alley. Check it out from Bechko and artist Randy Green when issue #1 of the mini-series hits the stands on September 14th.

Jason's been knee deep in videogames since he was but a lad. Cutting his teeth on the pixely glory that was the Atari 2600, he's been hack'n'slashing and shoot'em'uping ever since. Mainly an FPS and action guy, Jason enjoys the occasional well crafted title from every genre.
@jason_tas
Previous Shovel Knight to get first ever indie Amiibo figure
Next Konami outlines Metal Gear Solid companion app