Harley Quinn storms DC Collectibles’ new series of action figures, based on the upcoming Arkham Knight, with a pretty impressive figure loaded up with accessories. 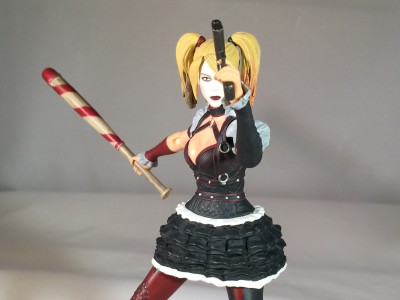 The third figure in the wave that we’re taking a look at here on BG, Harl is the lone female figure in the set… so far anyway. She’s actually pretty awesome too, and that’s a good thing as there aren’t a whole lot of Harley figures out there.

All I can think of off the top of my head are the original Batman: The Animated Series Harley and the one from Mattel’s awesome DC line that wrapped up a few years ago. I know there are more than that, but those are the only Harley’s that really stick in my head to any degree.

Since those B:TAS days, where she’s made her debut, she’s really shot up there in popularity. Now a staple of the comics, as well as a budding film star with Margot Robbie’s portrayal in the soon-to-be Suicide Squad movie, she doesn’t look to be going anywhere any time soon either. 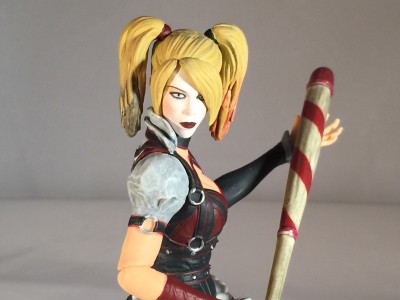 This figure, which just hit the market at the top of the month, doesn’t center on any of those incarnations though, as it’s instead a part of the Batman: Arkham Knight line. Harley’s appearances in that series of games  doesn’t cast her as the fun-loving (though completely insane) hero that she’s become in the comics though. She’s a villain, through and through, and devoted to her main man, Joker. Well, at least she was devoted to him till the end of Arkham City when… nah, I won’t spoil it. I know the game is plenty old and most everybody who would have wanted to play it would have by now, but it’s a big moment and I can’t spoil, so lets get back to Harl.

Much lie the other figures in this line, Harley sports some great articulation. She’s got double-joints at the knees, some awesome rocker joints at the ankles, and the usual bends at the elbows, ball-joints at the shoulders and hips, and twist and ab-crunch at the mid-section. All that sounds great, but she does have one fairly large drawback, the skirt.

Harley’s skirt is somewhat unique to this video game version of her and does play in pretty nicely with the rest of the ever-evolving look that developer Rocksteady has crafted for her. The problem though, is that the skirt is a soft-rubbery plastic and, while it does bend and flex, it doesn’t do so to a great degree and does limit her leg movement.

As you can see form the shots I took of her, you can definitely get her down into some crouching positions, but not every pose that you can think of. Is this a deal-breaker if you’re thinking about picking up one of these figures? No, not really, but it’s worth noting I think that there is some hinderance to the movement for a character that’s generally known as being a pretty active one. 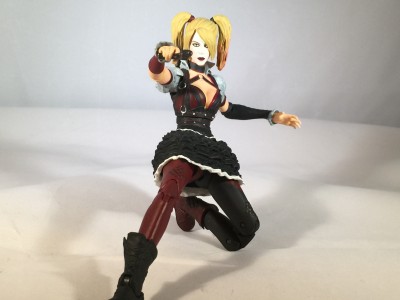 The sculpt on the skirt though, is really cool, and that happily carries through to the rest of the figure as well. Harley’s look from the game is meticulously reproduced here thanks to the talented hands of Gentle Giant studios, who’ve done a great job bringing Joker’s former psychiatrist to plasticized life.

She’s an odd mix, with a bit of the traditional version of Quinn (like with the leggings), a little bit of fantasy detailing (those shoulders), and some S&M thrown in for good measure with all the buckles and straps. It all just works for the character though, who’s supposed to be almost as crazy as Mr.J himself, and makes for an eye-catching figure.

There is one thing I didn’t really care for in the sculpt though, and that’s the face. It’s not that Harley is ugly at all, she’s as attractive as the character should be, but there’s no emotion on the face. She’s not angry, sad, or anything else, just kind of… indifferent I suppose. In all fairness, that might be something having to do with the story behind the game, but I think she should have had some kind of expression on her face. If not a twisted grin, then something akin to anger probably would have been appropriate after what happened at the end of Arkham City. 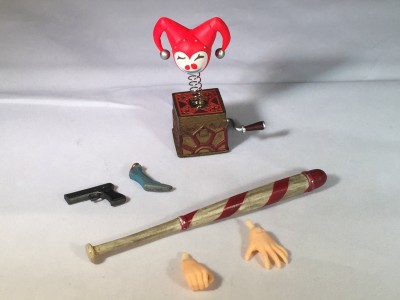 Can’t complain a bit about her accessories though as Harley is loaded. She comes complete with two extra hands, a pistol, a really cool jack-in-the-box (with a real spring), a bat, and… something. I’m not quite sure what the last piece of accouterment is, but it kind of looks like a detonator of some kind, which is kind of cool.  Overall though, the pack-ins are fantastic and in keeping with the great stuff that’s come packed in with all the other figures in this first wave.

That’s one thing that DC Collectibles really does well too, they accessorize appropriately. Theres nothing in the box that’s weird or not fitting for the characters that they’re selling, everything makes sense and I like that a lot. It’s line-wide really, but Harley comes with so many cool things I just thought I’d point it out here.

Even with a few faults, like the skirt limiting the articulation a bit and the facial sculpt being a little ho-hum, Harley Quinn is a great figure. This is the Harley from the games, so if you have shelf full of DCC’s offerings, then she’ll fit right in with all the rest.

And if you’re just a Harley Quinn fan who’s looking for another version her to join your collection, I don’t think you’ll be overly disappointed by what DC and Gentle Giant has done here. The sculpt is mostly terrific, the articulation is as well, and the accessories are awesome.

Jason's been knee deep in videogames since he was but a lad. Cutting his teeth on the pixely glory that was the Atari 2600, he's been hack'n'slashing and shoot'em'uping ever since. Mainly an FPS and action guy, Jason enjoys the occasional well crafted title from every genre.
@jason_tas
Previous It looks like Konami might be more or less done with console gaming
Next Bloodshot Reborn goes insane in issue #2