Another of the biggest X-Men crossovers of all time is starring in it’s own little Warzones universe in the upcoming Secret Wars event. And X-Tinction Agenda will pit X-Men against X-Men in the race for a cure to a virus that’s wiping out mutants. 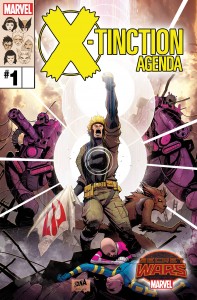 This June, the fight continues against the corrupt, Mutant-exploiting government as a classic X-Men crossover is reborn on Battleworld in X-TINCTION AGENDA #1! Writer Marc Guggenheim (Arrow Executive Producer) and artist Carmine Di Giandomenico (All-New X-Factor) return to the shores of Genosha for a can’t miss Secret Wars tale! It has been ten years since the fall of Cameron Hodge and his fascist regime. Ten years that Havok and Wolfsbane have toiled and labored to rebuild Genosha into the proud Mutant haven it once was. But a decade removed from Hodge and his iron-fisted rule, their work may be undone in an instant. A plague ravages across the nation, infecting mutants and threating them with extinction! With Genosha quarantined and all but abandoned by the rulers of Battleworld — as well as their former teammates, the X-Men – old friends may become bitter enemies in the fight for survival! Havok and Wolfsbane will stop at nothing to save those Mutants trapped on Genosha – but have they doomed Battleworld in the process? What would you do to protect your people? Find out as mutant battles mutant this June in X-TINCTION AGENDA #1!

These revisitations of crossovers past are getting pretty interesting, and I love the fact that there are so many focused on the X-Men. Of course, that also goes to show you just how massively popular the Marvel Mutants have been in the past few decades, and how much people love ’em. It’s great to see the classic teams in action once again, in these Secret Wars-linked books.

Jason's been knee deep in videogames since he was but a lad. Cutting his teeth on the pixely glory that was the Atari 2600, he's been hack'n'slashing and shoot'em'uping ever since. Mainly an FPS and action guy, Jason enjoys the occasional well crafted title from every genre.
@jason_tas
Previous Nintendo apologizes (again) for Amiibo shortages
Next The Old Blood oozes onto consoles and PC today