Prepare for The Force Awakens with Marvel’s Shattered Empire

A tie-in series for the upcoming Star Wars film The Force Awakens, Marvel Comics’ Shattered Empire explores the days after the Empire’s defeat in Return of the Jedi. 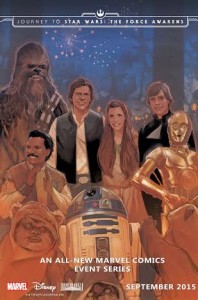 “The world has been wondering what happened after the fall of the Empire since the credits first rolled on ‘Return of the Jedi’ in 1983,” says series editor Jordan D. White. “Now, on the dawn of the next chapter of the saga, we’re incredibly proud to be involved in revealing the events that happen immediately following the end of ‘Return of the Jedi’!”

Taking place in canon with the film universe, Shattered Empire is poised to be a comic book that fans of Star Wars will probably not want to skip by when they visit their local comic shop this Fall. The limited series will be brought to market from writer Greg Rucka and artist Marco Checchetto, and will chronicle the events that took place between Return of the Jedi and The Force Awakens.

According to the publisher, this one is being crafted in close cooperation with Lucasfilm, and will offer (along with the Star Wars Battlefront video game) one of the first glimpses of Star Wars’ post-Trilogy universe before the first of the new movies hit. With the new setting and that kind of creative team behind it, I don’t doubt that Shattered Empire will be a sharp book.

The comic is set to hit stores this coming September, while Star Wars: The Force Awakens will arrive in theaters this December, which all makes for quite the Autumn for Star Wars fans.

Jason's been knee deep in videogames since he was but a lad. Cutting his teeth on the pixely glory that was the Atari 2600, he's been hack'n'slashing and shoot'em'uping ever since. Mainly an FPS and action guy, Jason enjoys the occasional well crafted title from every genre.
@jason_tas
Previous The first teaser for Batman v Superman officially released
Next New Fantastic Four trailer shows more story, all four heroes, and Doom