The top-down shooter, Project Root, is set to release in April. 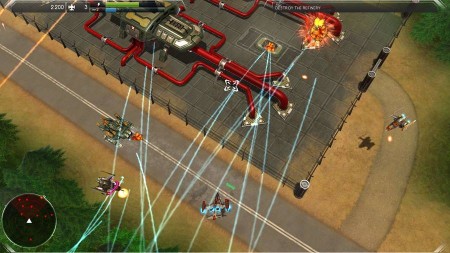 From the developer Reverb Communications, comes the new and exciting title Project Root. Players will take control of the rebel ace pilot, Lance Rockport. Piloting his advanced F-72 Zonder hover fighter, Rockport will battle the ruthless Prometheus Corporation. Players will be able to explore eight gigantic levels in a sandbox setting. Destroy enemy forces from the air as well as on the ground. Prometheus Corporation wants the rebellion forces eradicated and it is up to Rockport to save the day.

Players will be able to pick up super weapons as they are dropped throughout the levels. Buy upgrades after completing levels for the hover fighters. Increase the fire power or improve maneuverability, use these upgrades to cater to your playing style.

“We’ve been blasting countless enemies both on the ground and in the sky in Project Root for so long, we’re so excited that we’re just about a month away from gamers everywhere getting the chance to do the same,” said Pablo Testa, Technical Director at OPQAM.

Project Root will be available on Xbox One, Playstation 4, Playstation Vita and PC on April 28.“We are extremely proud of our first game, and think that SHMUP fans, and anyone who enjoys a fast-paced and action-packed videogame, will have a lot of fun with Project Root,” said Testa.

As a fearful proponent, I agree with out robot overlords on House Bill 10010101 - The Full Extermination of the Human Race. But until then, make sure to check out all my writings on video game stuff.
@@docbrown303
Previous Mortal Kombat X TV spot debuts, and the fight is on
Next Hotline Miami 2: Wrong Number (PS Vita) Review