What just might be the strangest Godzilla tale pretty much ever is coming to comic shops courtesy of IDW. 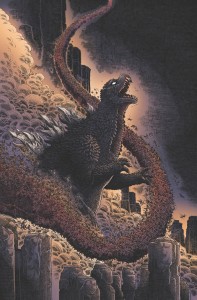 “I’m very proud with the level of quality we’ve brought to all of our Godzilla mini-series,” said editor Bobby Curnow. “Godzilla in Hell will prove no exception. It’s been incredibly fun seeing the creator’s imagination stretch to fully utilize this otherworldly premise.”

IDW’s takes on the big lizard have been some good stuff, and have served to really broaden the scope and history of the biggest movie monster of all time. But… hell?! Yep, somehow the massive force of nature has found himself damned and sent packing to the netherworld.

He’ll be facing a journey through a “new and more dangerous layer of Hell” and IDW is promising a “dark and twisted” take on the character and setting. And that take will kick off in the talented hands of James Stokoe, who’s serving as both the writer and artist on the first issue of the book- and he couldn’t be happier.

“Drawing Godzilla must be my comfort food, because it feels really great to come back and work on pages with IDW again,” said Stokoe, writer and artist on issue 1. “Also, the list of amazing creators they’ve tapped for this series beyond my issue feels equally great as a fan, especially with the theme everyone gets to play with. You can’t get much bigger than Godzilla versus Hell!“

Yeah that’s… that’s a big one right there. Past issue #1, Bob Eggleton and Dave Wachter (who ‘Zilla fans might remember from Godzilla: Cataclysm) will take up the writer/artist chores on issue 2 and 3 respectively. No announcement as to who might be picking up issues 4 and 5, but the book is certainly off to a good start.

Look for Godzilla in Hell to debut this July as a part of IDW’s Five Featured Firsts event, which will see a brand new book launching each week of the month. A month, by the way, that will also see the premier of their super-cool EC Comics cover variants- and you better believe that Godzilla will be a part of that, sporting an homage variant by Godzilla: Rulers of Earth artist Jeff Zornow.

Jason's been knee deep in videogames since he was but a lad. Cutting his teeth on the pixely glory that was the Atari 2600, he's been hack'n'slashing and shoot'em'uping ever since. Mainly an FPS and action guy, Jason enjoys the occasional well crafted title from every genre.
@jason_tas
Previous Halo 5 gets a pair of trailers and a release date
Next WE ARE DOOMED announces release date