This dark and twisted tale looks to turn off the lights, but don’t fear, as there’s a little sliver of light left in the world of White Night. 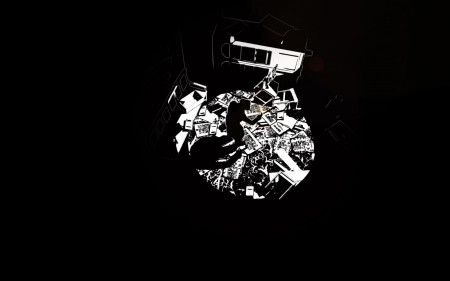 White Night is a spooky, story-driven narrative from Osome Studios. This noir-style tale takes place during the end of the Great Depression and is chock full of murder, mystery… and ghosts. It’s done in a black and white aesthetic, and the monochromatic approach is brilliant and mostly executed well. Compounding the mysterious nature of the game, the story is focused on a man with a bad case of amnesia who is trapped in a mansion.

Things start out when, after a long night of drinking and in a haze, the main character crashes his car into a tree. He stumbles out of the vehicle to see a mansion in the distance, and is drawn to this mansion for some reason that he cannot fathom. As he stumbles his way up to the structure, he sees a supernatural visitor who urges the main character to follow it inside. And it’s inside this mansion that lies the mystery, and players must use their wit to solve the puzzles ahead.

The black night engulfs the mansion, and making things worse, inside the shadows something lurks. Once the main character makes his way into the house, he finds that the lights don’t seem to work and the only way to get around is by lighting matches. Players will be able to see objects and clues strewn throughout the house by this dim match light, which is necessary to forge ahead.

Through journal entries and notes found around the mansion, players will learn about who the main character is and about the mansion’s inhabitants too. These other inhabitants hide in the shadows, but what are they and what do they want?

One thing’s for sure, throughout the adventure you’ll experience a bunch of scary ghost sightings. The motives behind these spirits are shrouded in mystery, so not only does this man have amnesia, he is also stuck in a mansion full of angry ghosts. And the only way to destroy these ghosts is by turning on a source of light and burning them away.

This puzzle mechanic is a reoccurring presence and will be the only way to make these apparitions disappear. The black and white noir look is more than just an art style in the case of White Night, as the light and dark style is also very much a part of the puzzles, as well as the narrative, since it’s between the light and the dark that a story starts to unfold.

Unlike the story, the gameplay in White Night is simple and consists of a button to light matches, a run button, and an action button. This is a story-driven game, so there is no combat to speak of. Instead, you’ll learn of what happened to the people who lived in the mansion through notes and diaries that progress the story forward.

I won’t spoil anything, but I will tell you that the people in the mansion were all connected in some way, and that the spirits urge the main character forward throughout the adventure. It is an ingenious move and really engulfs a character and immerses them into the environment, since it’s almost a character unto itself.

Walking through the house and trying to stay in the light creates a tension unlike any other horror title I’ve played. If the main character stays in the dark too long, something happens to him. The player does not see what happens and the controller violently vibrates, so it’s kind of an indirect scare – another clever design trick that continues to add to the mysteries hidden in the dark. The mansion and the dark are just as important a character as who you play as really. For every action throughout the game, there is a reaction. There is a constant game of cat and mouse, though the main character is rarely on the offensive.

White Night is a fun game that offers a unique experience. The way the light and dark are used is something I have not seen in a video game before and this aesthetic does an amazing job of really setting the environment apart, and really transporting the player into the game. With that being said this game is all about the dark so I would suggest playing it in the dark. Playing during a dark stormy night makes for a better experience than playing on a sunny afternoon. The horror element of this title reminded me of a good but subtle horror movie.

I don’t see White Night as a survival horror game, which is kind of how it’s billed. The real purpose of this game was to solve a murder mystery, and everything else in it is an obstacle that needs to be solved. I never felt like I was battling for my life during White Night, which isn’t a bad thing.

This game is a lot of fun and the story is full of twists and turns, just make sure to keep a pocket full of matches and don’t get lost in the dark. If you are looking for a physiological thriller and have a bit of time to invest, then White Night is a sure fire bet.

As a fearful proponent, I agree with out robot overlords on House Bill 10010101 - The Full Extermination of the Human Race. But until then, make sure to check out all my writings on video game stuff.
@@docbrown303
Previous Woolfe: The Red Hood Diaries takes a bite out of Steam
Next Ninjak #2 hitting same day as second printing of sold out 1st issue

It’ll almost be a whole new game for Ghostrunner fans, when the game’s Project_Hel expansion …