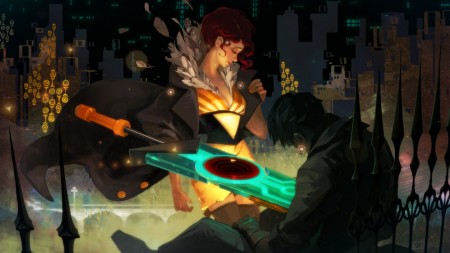 The game design, art, soundtrack, story, and mechanics flow together to create a unique game experience. Supergiant knows how to craft elegantly simple games that use story and interesting gameplay to take players on a unique adventure. While some exploring is necessary to fully understand the beauty of Transistor, the game is well worth the time. Transistor shatters expectations.

The game takes place in a digital realm that is slowly disappearing. No one in the city of Cloudbank knows exactly what is going on, including Red, the main character. The gameplay begins when Red is awakened by a voice calling out to her. The voice belongs to the Transistor, a sword-like object Red finds lodged in the body next to her. The Transistor becomes Red’s companion, narrating the story and explaining Cloudbank and the Process. It’s an opening that sets the tone for this wonderful gaming adventure.

This is a tale of invasion, conspiracy, love, and torment in a digital world. The concept of an anthropomorphized code world is not new of course, but it was excellently executed here. The characters were also incredibly interesting once it became clear how to learn more about them. Some have complained that Transistor is too short, yet the story is completely resolved and the game did not feel rushed in the least. The developers spent time crafting a quality game rather than drawing out gameplay unnecessarily (Developers take note -ed). 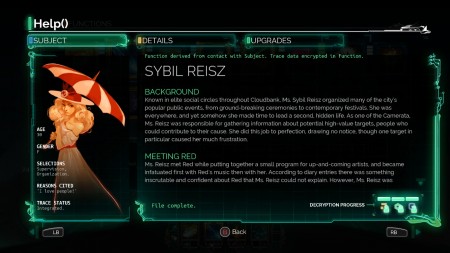 Transistor’s story is a mystery in the beginning and remained this way for a good portion of the game. However, once the story did click, everything became even better. The game is actually playable and enjoyable without the story too; yet it is the connection between narrative and gameplay that heightens the experience. Many features of the game aren’t very apparent at first glance, but this can be avoided if players fully explore the access point menus.

Transistor’s gameplay is fun and unique, especially in the fact that the Transistor is Red’s weapon as well as her companion. Players begin with two combat abilities and gain more from the bodies of former Cloudbank citizens.

The customization of these abilities and the turn() ability make the gameplay outstanding. Turn() refers to Red’s special ability to freeze and plan out her actions during combat. This strategic element requires players to explore the whole spectrum of possibility to understand their particular gameplay style. Each combination creates unique strategies that allow players to completely tailor their gameplay. The practice tests and skill tests are also great resources for trying out various combinations and testing their limits. Ultimately, your particular combat strategy will come down to how you plan your “turn()”.

Enough cannot be said about Transistor’s art direction, aesthetics, and soundtrack. Cloudbank feels like a complete world. Supergiant’s physical representation of this code world was equally apparent and beautiful. Transistor has such a strong art direction that is unique and innovative while staying true to Supergiant’s style. 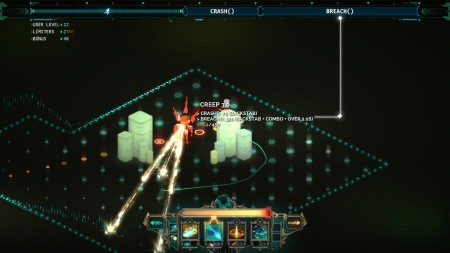 The blending of the story into the gameplay, and the art working with the story is brilliant. Transistor’s effortless ambiance fully immerses the player and elevates gameplay. But while all that is accurate, the true aesthetics star here is the music. From the beginning, the soundtrack entrances you. It is haunting and compelling, pushing Red with the Transistor forward. It is truly a shame Transistor has yet to win an award for its soundtrack.

Transistor redefines how indie games are perceived. Supergiant Games created a beautiful world filled with unique story, gameplay, and ambiance that places players on a flat-out beautiful journey through this rich world.

The integration of captivating story with interesting gameplay sets Transistor apart, while the art and music rocket the experience to a new level. If you are a PlayStation Plus member, go download this for free right now. It is beyond worth it.