The classic X-Men tale plays out in a part of Battleworld where the team failed to protect Manhattan from the demon hordes and the Goblin Queen. 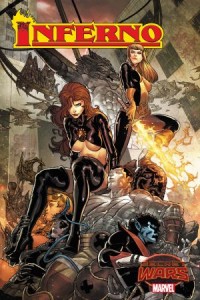 Welcome to the ruins of Manhattan, now ablaze with fire and brimstone. Five years ago, a band of demons rose out of the fiery depths and turned Manhattan in to Hell on Earth. The X-Men were all that stood in the way of complete and utter obliteration. The X-Men fought for survival…and the X-Men failed.

Now, on this the fifth anniversary of the fall of Manhattan, Colossus is leading a small band of surviving mutants back into the Inferno. None of them know what resides on the other side of those flames but he knows one thing…he’s not coming back without his sister!

Kind of a late addition, as most of the returning crossovers were announced last Fall, Inferno is nonetheless a welcome one. This is one of the biggest X-events of all time, and one of the best written and put together. And keeping with the spirit of the multiverse-fusing event Secret Wars, we’ll get to see how it would have played out in the long run, if the X-Men had fallen to the demon invasion.

I love the fact that Colossus is taking center stage here too, as he’s more often than not passed over in favor of some of the more popular members of the team like Wolverine and Cyclops. He’s got a nice personal score to settle here too, with his sister being a part of the Goblin Queen’s dominion.

“He lost his sister to the Inferno five years ago and is absolutely obsessed with getting her back,” says writer Dennis Hopeless in an interview with Marvel.com. “Unfortunately, nobody is allowed in or out of the Island. Piotr has been carrying this heavy burden around for years, always waiting for his next opportunity to right the wrong. He’s definitely not somebody you’d want to mess with.”

This one sounds like a good time, well, for readers anyway. Inferno #1 arrives on the racks This May from Dennis Hopeless and Javier Garron.

Jason's been knee deep in videogames since he was but a lad. Cutting his teeth on the pixely glory that was the Atari 2600, he's been hack'n'slashing and shoot'em'uping ever since. Mainly an FPS and action guy, Jason enjoys the occasional well crafted title from every genre.
@jason_tas
Previous The transfer process from a 3DS to a New 3DS is almost painful
Next PIX THE CAT: INTERVIEW WITH GAME DESIGNER NADIM HADDAD OF PASTAGAMES