Home / 3DS / The Nintendo Download heads into the danger zone- in 3D!

The Nintendo Download heads into the danger zone- in 3D!

After Burner 3D jets onto the 3DS in an eShop update that also includes Lufia: The Legend Returns from the GameBoy Color and Street Fighter 2010: The Final Fight. 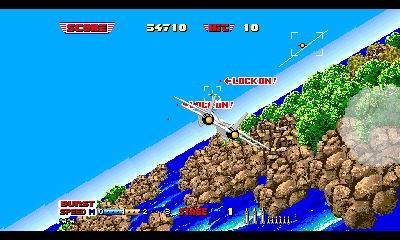 There isn’t a ton of new stuff on the eShop this week, but at least things are starting to get back to normal to some degree after the post-Holiday lull. Leading things in the right direction of course, is After Burner 3D from Sega. The game is a pretty straight-forward port of the classic arcade title, but cast in a 3D view mode as it’s part of Sega’s 3D Classics line.

Other than the wild, blue yonder, there’s also some RPG action in Lufia: The Legend Returns, which is a pretty fun game if I remember correctly… though I don’t think it’s aged all that well. Not in the mood for flying or role-playing? How about a trip through the post-apocalyptic world of Street Fighter 2010: The Final Fight?! No, before you ask, this game has next to nothing to do with either Street Fighter or Final Fight. Originally appearing on the but stars  Ken (not really sure if it’s that Ken) who has to battle a bunch of monsters and teleport across the galaxy… or something.

Jason's been knee deep in videogames since he was but a lad. Cutting his teeth on the pixely glory that was the Atari 2600, he's been hack'n'slashing and shoot'em'uping ever since. Mainly an FPS and action guy, Jason enjoys the occasional well crafted title from every genre.
@jason_tas
Previous Toy Fair 2015: Dark Horse to unveil new Game of Thrones Daenerys statue
Next Can the Guardians and the X-Men stop the Black Vortex?