Home / Comics / Can the Guardians and the X-Men stop the Black Vortex?

Can the Guardians and the X-Men stop the Black Vortex?

There’s a new evil force in the Marvel U and it’s going to take a whole mess of heroes to stop it. 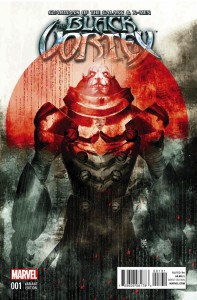 So what is the ‘Black Vortex’ anyway? Well, basically, it’s a cosmic level doodad that can grant its possessor all kinds of unspeakable power. So pretty run of the mill actually then. As you might imagine though, there are some very bad people that might want to get their hands on something that could gift that kind of strength. In this case, the evil we’re talking about is Thane, Thanos’ ratty son, and Mr.Knife (I’m out of the loop on him. I think).

“What happens when one person submits to the Black Vortex and becomes a titan of the cosmos? What happens when a whole team does it? Or a whole planet?” says Guardians of the Galaxy & X-Men: The Black Vortex Alpha #1 writer Sam Humphries in an interview with Marvel.com. “Imagine the metamorphosis that turned Norin Radd into the Silver Surfer, or Jean Grey into Dark Phoenix, available to anyone in the Marvel Universe.”

“But of course, no amount of power comes without a cost,” Humphries continued.

Woo, that actually does sound pretty dang impressive right there. No wonder those baddies are after it. In all seriousness, it’s pretty rare that Marvel introduces something like the Black Vortex. I mean, you’re throwing around names like Silver Surfer and Dark Phoenix here in the same breath, that’s pretty impressive.

With both he Guardians of the Galaxy and the X-Men involved in the narrative here, this should be a fan pleaser of a story too. And with Marvel promising that not only will the heroes be out to stop the bad guys and collect the Vortex, but that they’ll be tempted to use ti for themselves, there may be some very cool themes present as well.

Check out issue #1 when Guardians of the Galaxy & X-Men: The Black Vortex Alpha #1 lands on the racks from the team of Humphries, Ed Mcguinness, and Kris Anka on February 4th.

Jason's been knee deep in videogames since he was but a lad. Cutting his teeth on the pixely glory that was the Atari 2600, he's been hack'n'slashing and shoot'em'uping ever since. Mainly an FPS and action guy, Jason enjoys the occasional well crafted title from every genre.
@jason_tas
Previous The Nintendo Download heads into the danger zone- in 3D!
Next Get up close and personal with Harran City in new Dying Light website