The Eternal Warrior’s Days of Steel wrap up this month

Issue 3 of the 3 issue mini-series from Valiant Comics is almost here, but will Gilad’s quest end in failure? 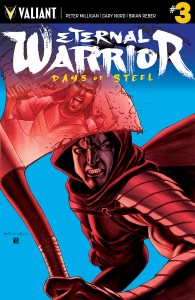 With steel sparking and axes clashing in battle, the hero of countless wars since time immemorial may yet find success…by laying down his weapons and yielding the fight. The field of battle will run red when this epic anthem of warfare and heroism by master storyteller Peter Milligan (Hellblazer) and Eisner Award winner Cary Nord (X-O Manowar) roars into its final chapter!

If you’re a regular reader of Gilad’s adventures, then I probably don’t have to say too much here to get you excited for this one. If not though, basically all you need to know is that he’s an immortal warrior (hence the name) who’s carved a bloody swath across the Earth in the name of a line of ‘guardians’ who protect the globe from disaster and keep it in balance.

Days of Steel, the mini-series starring the man in question, has been nothing short of chock full of action and more of what fans are looking for when they pick up an Eternal Warrior book. This is the third and final issue in the mini too, so if you’ve been following all along, now’s not the time to stop reading.

Writer Peter Milligan and artist Cary Nord bring the Warrior to life one more time when Eternal Warrior: Days of Steel hits the stands next week, on January 7th.

Jason's been knee deep in videogames since he was but a lad. Cutting his teeth on the pixely glory that was the Atari 2600, he's been hack'n'slashing and shoot'em'uping ever since. Mainly an FPS and action guy, Jason enjoys the occasional well crafted title from every genre.
@jason_tas
Previous Summer 2015 heats up for DST
Next Looking back – BrutalGamer’s favorite stories from 2014