Dark Horse Comics has a Limited Edition of their upcoming The Art of He-Man and the Masters of the Universe book that fans aren’t going to want to miss out on. Just make sure you pre-order one, because these aren’t going to last. 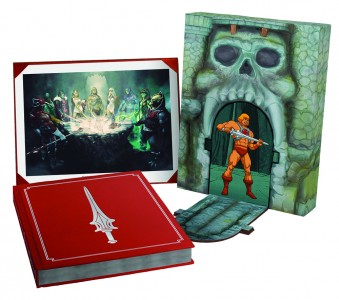 Limited to only 4,000 copies, the The Art of He-Man and the Masters of the Universe Limited Edition is pretty freaking sweet if you’re a longtime Masters fan. The book, which is the limited variation on the standard edition we told you about a while back, comes complete in a special Castle Greyskull slipcover (with a jawbridge!), with a foil embossed cover and portfolio print, and a forward written by Tim and Steve Seeley.

Like the standard edition, this one has a pretty complete picture of the phenomenon that is Master of the Universe. From the beginnings in 1982, through the preset day and the Masters of the Universe Classics toy line and DC Comics New 52 ongoing series, this book has just under 400 pages of pure awesome. Not just a collection of artwork either, you’ll also find interviews with Dolph Lundgren, Paul Dini, Erika Scheimer and more in its pages. Kind of a must-have.

The Art of He-Man and the Masters of the Universe Limited Edition will be available for pre-order as long as supplies last and can be had by hitting up one of the following sites: Think Geek, PopCultcha, Big Bad Toy Store, Forbidden Planet, TFAW, Dark Horse Booth at 2015 Conventions. You can expect to see the standard edition of the book on store shelves around the same time as the Limited version, this coming April the 15th in comic books shops and online, and on the 28th in bookstores.

Jason's been knee deep in videogames since he was but a lad. Cutting his teeth on the pixely glory that was the Atari 2600, he's been hack'n'slashing and shoot'em'uping ever since. Mainly an FPS and action guy, Jason enjoys the occasional well crafted title from every genre.
@jason_tas
Previous Toys R Us preps for post-holiday sales
Next Hotline Miami 2 Collector’s Edition to play it old school on vinyl