Forza Horizon 2, for the Xbox One, is one of the most enjoyable driving games ever! 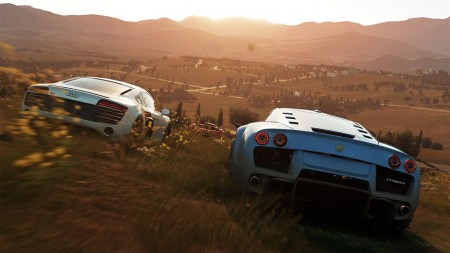 The holiday season is upon us, and most of the highly anticipated games are out. We have all sorts of great first-person shooters and action-adventure games, but what about driving games? I sat down with the latest Forza offering on the Xbox One, Forza Horizon 2, and these are my thoughts.

Let me begin by saying that Forza Horizon 2 is fun. It really is! From the game’s youthful style to the actual gameplay, I found myself smiling and having a great time more than I have with any other driving game in the past. The reason I found it so enjoyable was because of the amount of freedom and choice given to me even from the beginning.

You can practically drive anywhere – you don’t have to follow the road. If you want to get from your location to another race, you can take any path you want to. It’s similar to the open-world enjoyment found in games like Grand Theft Auto. Not only are you encouraged to explore the world, but there are rewards to find in practically every location – hidden cars, additional racing events, signs that can be smashed to increased you experience. Increasing your level also gives you a chances to win additional cars or money, by spinning a wheel of chance. 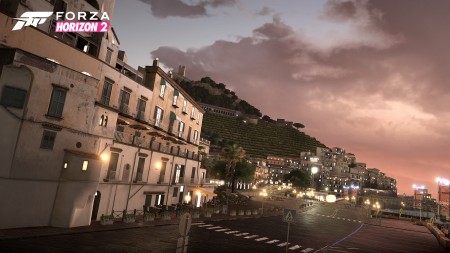 While you’re driving around in single-player, the world will be populated with a mix generic mix of A.I. controlled cars and Drivatars. Drivatars are basically computer-controlled opponents, whose driving technique is based on their actual Forza Horizon 2. Even the car they race with is from their own in-game garage. Many times I raced Brutal Gamer’s very own Mike Jones, without him actually racing against me in real-time — some of them I won, but most of them I lost (dang it!).

Just like other Forza games, including the original Forza Horizon, there are a lot of cars to earn and a ton of way to customize. This includes both casual and in-depth upgrades and customization to the way your cars look and drive. If you simply want more horsepower, you can purchase upgrades and have them installed as-is, or if you preferred the level of configuration from games like Gran Turismo, you can get your hands dirty with granular adjustments to your cars’ performance and style.

Forza Horizon 2 is also a beautiful game. While the Xbox One might be slightly behind the PlayStation 4 in terms of graphic fidelity, it’s certainly not to the level that some of the hardcore Sony enthusiasts may want you to believe. The scenes are photo-realistic, and everything has impressively high-resolution textures. The draw distance is far, but the game does have some occasional pop-ins if the scenes are a little complex.

Weather is dynamic – often times I’ve gone from a sunny day to rainy in a short amount of time. Not only does it look really cool to drive in the rain, but it also changes the slickness of the road, and can make for some very interesting races, especially if you have a storm show up in the middle of it. Forza Horizon 2 also features night and day cycles, which also impact your driving and visibility. I highly recommend NOT taking the shortcut through the forest at night — it’s really hard to see. 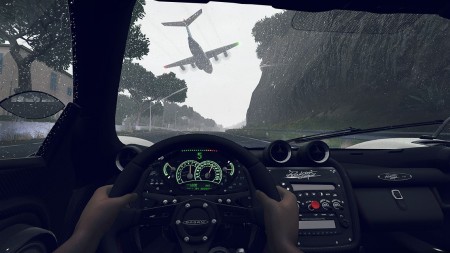 While there were many things to love about Forza Horizon 2, one of the things I absolutely loathed about it was that these was no easy (or obvious) way to turn off or mute your opponents’ voice chat during online games. To be fair, this may have been more of an Xbox One architecture thing than a game development oversight. While I didn’t experience too many players who were mean-spirited or rude, there were several players who were a bit too chatty and I just wanted to shut them up. After playing games like Destiny, that require players to opt-in to voice chat with others, I really wish there was a way to easily mute players.

Forza Horizon 2 features over 200 automobiles to choose from – including non-car vehicles like pickup trucks and Hummers. While there are other car packs that can be purchased for an additional cost, I felt the standard game had plenty to choose from, and never experienced an instance where I was “forced” to spend additional money on downloadable content to enjoy parts of the game or participate in a race that I really wanted to.

Forza Horizon 2 is available from retailers or via the Xbox Store for $59.99. According to the game listing on Xbox.com, it will require at least 36.7 GB of space on the hard drive.

It’s a perfect time to get an Xbox One, now that Microsoft has reduced the price of the console during the holiday shopping season. While there are plenty of other great games to get lost in while playing, Forza Horizon 2 is especially awesome!

It looks beautiful and the game’s open-world environment not only encourages exploration, but rewards you for doing so. There are plenty of things to do, and plenty of races to participate in, and you’re not stuck to closed-in tracks. I really enjoyed being able to go anywhere and do practically anything.

While other games have offered open-world driving, like the original Forza Horizon and the Need for Speed series, Playground Games and Turn 10 has done a great job filling a vast European world with lots to do and lots to find. I hope more racing games find inspiration from games like Forza Horizon 2, because it’s a blast to play, and compliments the Xbox One nicely. I definitely recommend it!

Troy is the Features Editor at Brutal Gamer. When he's not writing about or playing video games, he's enjoying life with his wife and children. He also loves coffee. And lots of it.
Previous Saturday Radar: GamesRadar’s best for the week of 11/10/14
Next A chat with Howard M. Shum, the creator of Supertemporal