The red-symbioted psychopath turns hero as Axis tips the Marvel U on it’s ear. 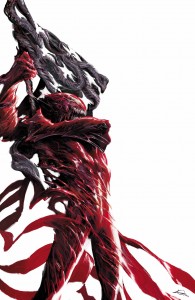 This October, peer into the mind of one of the Marvel Universe’s most vicious villains as he becomes…its greatest hero?! Today, Marvel is proud to present your first look at AXIS: CARNAGE #1, the new limited series spinning out of the highly anticipated Avengers & X-Men: AXIS! From writer Rick Spears and newcomer German Peralta – the symbiote psychopath is back in NYC, only something’s a little bit off. The events of AXIS have turned this psycho serial killer into a crimson crusader of justice – only he has no idea how to be one! As the Red Skull’s evil washes over the planet, we need a hero like never before – and Carnage is it! Be there when the Marvel Universe gets a glimpse of its newest protector in AXIS: CARNAGE #1 – hitting comic shops and digital devices this October!

Yep, as weird as it might seem, Carnage is making a face turn. Maybe. I can’t imagine the little lunatic staying on the side of the right and the just for all that long. I mean, the dude rips people in half for fun, that’s not all that superhero-y now is it.

Strange as it is, it’s just as cool and I’m really digging the way that Axis is swapping the Marvel Universe, no matter how temporary it might be. Just like the last few big Marvel Events (with the exception of Age of Ultron), Axis just has that feel of a big old classic Marvel ‘event’. Well, it does for me anyway and I’m a huge fan of the publisher’s older event books like Infinity Gauntlet and just about all of the X-crossovers.

And as those crossovers go, this is gonna be an interesting one. Carnage- a hero? Find out how true that statement might be when Axis: Carnage #1 hits the racks on October 29th form the team of Rick Spears and German Peralta.

Jason's been knee deep in videogames since he was but a lad. Cutting his teeth on the pixely glory that was the Atari 2600, he's been hack'n'slashing and shoot'em'uping ever since. Mainly an FPS and action guy, Jason enjoys the occasional well crafted title from every genre.
@jason_tas
Previous That nasty little goblin Styx debuts today on consoles and PC
Next The Evil Within has horror, horror, and more horror… and gore