It’s Halloween month here at BG and I’ve decided for this month, once a week, I will be reviewing the first movie of each of the four most iconic kings of horror; starting this series, we have A Nightmare On Elm Street. 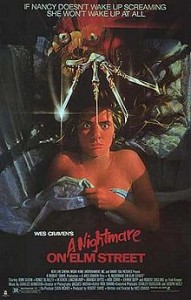 For someone who tells people all the time that he loves all things horror, I actually surprised myself when I realized I’ve never actually sat down and watched any of the Nightmare on Elm Street movies. Of course, I knew what they were about and who Freddy Kreuger was, but I had never actually watched one. For some reason, I thought this was supposed to be campy horror, similar to that of Evil Dead. I uh… I was wrong.

Not a whole lot scares me, but some of the events that take place in A Nightmare On Elm Street definitely caught me off guard (possibly because I was expecting a semi-comedy).

The story starts with who seems to be the main character, Tina Grey, running from an unknown entity following and taunting her. She runs through this maze-like area of steam pipes and boilers until she ends up in a corner. She turns around to reveal the movie’s main antagonist- Freddy Kreuger. She then gasps and wakes up. Tina reaches above her head and takes hold of the crucifix above her bed, she squeezes it close to her chest and tries to go back to sleep.

The next day she questions her friends about the dream and, as it turns out, they all had the same dream (though this isn’t revealed at the time). Being too scared to sleep alone, she decides to invite her best friend Nancy over, as well as her own boyfriend. After a little bit, Nancy’s ex-boyfriend shows up, and they go to the bedroom for some late-night hankey-pankey. This being a horror movie, it’s not long before Freddy tries to join in and get him some, but apparently burnt and torn skin is a bit too kinky for two teenagers.

I won’t say any more about the story, in case there are more people like me who have yet to see the movie. Where the true draw to A Nightmare On Elm Street resides though, is in the scares and (for the time) the fantastic effects. Although I’m trying to stay away from spoilers, I will reveal one thing for those who might think that A Nightmare on Elm Street is a bloodbath. It might surprise you to hear that there are only three actual deaths in the whole movie. That’s not to say that these three deaths lack the red stuff though as each of them somehow outdoes the one before it. Aside from the blood and gore though, the basic premise of the movie alone is scary in a way; the ghost of a killer, stalking and killing people in their dreams… that’s just plain creepy.

Kind of surprising too is that the acting in the movie is pretty good too, apart from one line that I found very entertaining: “That was such a strange dream, maybe we’re gonna have an earthquake”… what the? I have to add also that Robert Englund does a wonderful job as Freddy Kreuger. It’s extremely easy to see why this became such an iconic role for him.

I apologize for the shortness of the review, but it’s honestly hard to write a review for an hour and a half movie without revealing too much of the actual plot. I really hate spoiling anything and, on top of that, I’m also used to writing video game reviews. It might not sound like there’d be too much of a difference, but there’s so much more to talk about with a game than a film.

Overall though, I would definitely watch A Nightmare On Elm Street again. There is a reason it’s considered one of the greatest horror movies of all time. If you haven’t seen it, and you’re down for some of the scary stuff, I recommend you check it out.