The popular BBC action/adventure about cloning and conspiracies heads to the printed page courtesy of IDW. 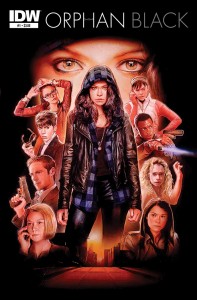 “Orphan Black, in addition to being a captivating TV series, is a perfect premise for comics,” said Chris Ryall, IDW’s Chief Creative Officer/Editor-in-Chief. “And as the second season has expanded the series in exciting new directions, that has only increased the amount of stories we’ll be able to tell in comic-book form.”

Set to be all new stories told from within the shadowy world that the show set up, Orphan Black the comic series won’t be a ‘clone’ of the TV program, but something new entirely. It does sound like main character Sarah Manning will be present in the book though, which’d make sense since the entire narrative circles around her and her clones, all of whom are a part of a dark plot.

This should be as official of an expansion as you can get too, since IDW has been working with the show’s producers to ensure authenticity and adherence to the fiction.

“We’re so thrilled for Orphan Black to take shape as a comic series and join the ranks of IDW’s impressive roster,” said John Young, Managing Director of Temple Street Productions. “Orphan Black was met with an enormous amount of enthusiasm at last year’s Comic-Con which really inspired us to give back to fans of the show through a medium so vital to the science fiction world.”

The full creative team will be announced soon, but in the meantime you can feast your eyes on the cover art, brought to life by artist Nick Runge. Orphan Black will launch from IDW in early 2015.

Jason's been knee deep in videogames since he was but a lad. Cutting his teeth on the pixely glory that was the Atari 2600, he's been hack'n'slashing and shoot'em'uping ever since. Mainly an FPS and action guy, Jason enjoys the occasional well crafted title from every genre.
@jason_tas
Previous SDCC 2014: Bandai Namco brings a double dose of Pac-Man to the show
Next Sacred 3 is all about the team… and a little personal glory